GPS Tells Man To Drive Off Bridge, He Does

The old saying goes, “If you were told to jump off a bridge, would you?” Well, one man did just that after his car GPS led him to a collapsed bridge. The driver was 64-year-old Iftikhar Hussain. His out-of-date GPS gave him directions to a bridge that was no longer in operation.

Hussain was in the car with his wife, Zohra. The pair was traveling from their home in Chicago to another state to visit with family. The Hussains were in Indiana when the GPS led them to the Cline Avenue Bridge. The only problem is the bridge has been closed since 2009. Part of the bridge was demolished in 2010 after the Indiana Department of Transportation decided to condemn the bridge.

Police reports say that Mr. Hussain was so involved in the GPS’ directions that he trusted the device when it told him to take Cline Avenue. According to authorities, the ramp is barricaded, but still accessible. Though, Hussain angrily drove around barricades.

Lake County Sheriff’s Department spokeswoman Patricia Van Til says Mr. Hussain must have stubbornly driven his 2014 Nissan Sentra around barriers in order to stick to the bad GPS directions.

“The Cline Avenue bridge is marked with numerous barricades including orange barrels and cones, large wood signs stating “road closed” with orange striped markings,” Van Til explained, according to Fox News 13. “There are concrete barricades across the road to further indicate the road is closed.” 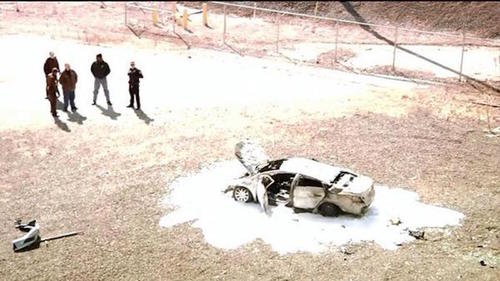 Surprisingly, the couple survived the 37-foot plunge. Mr. Hussain was able to drag himself out of the wreckage, but his wife was trapped in the car when it burst into flames.

“51-year-old Zohra Hussain died of burns at the scene of the crash, but Iftikhar Hussain was taken to Methodist Hospital Northlake, where he was listed in stable condition.”

This Man Eluded Police On His Motorcycle, Watch The YouTube Video That Led To His Arrests