After more than a decade of public silence, Monica Lewinsky comes out into the open to share her story in the context of public shaming and cyber-bullying in a TED Talk this week.

Lewinsky opens her talk with a short anecdote of a man who tried flirting with her: “You know what his unsuccessful pickup line was? He could make me feel 22 again. [Laughter, Applause] I realized later that night, I’m probably the only person over 40 who does not want to be 22 again.  [Laughter, Applause] At the age of 22, I fell in love with my boss, and at the age of 24, I learned the devastating consequences.” 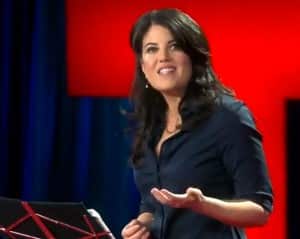 She relates how the advent of the Internet had put not just a spotlight but a magnifying glass on her case: “… when the story broke in January 1998, it broke online. It was the first time the traditional news was usurped by the Internet for a major news story, a click that reverberated around the world. What that meant for me personally was that overnight I went from being a completely private figure to a publicly humiliated one worldwide. I was patient zero of losing a personal reputation on a global scale almost instantaneously.”

Lewinsky shares her own reflections on public shaming and cyber-bullying with unabashed honesty and dignity. She turns the spotlight of compassion not just on herself, but also on the case of Tyler Clementi, an 18-year-old Rutgers University freshman who jumped to his death from a bridge after his roommate turned the room webcam on his intimate moments with another man. Lewinsky calls on her audience to dwell on the consequences of cyber-bullying, on how it has driven many people to take their own lives to spare them the weight and pain of humiliation.

She closes her talk with this statement:
“Anyone who is suffering from shame and public humiliation needs to know one thing: You can survive it. I know it’s hard. It may not be painless, quick or easy, but you can insist on a different ending to your story. Have compassion for yourself. We all deserve compassion, and to live both online and off in a more compassionate world.”