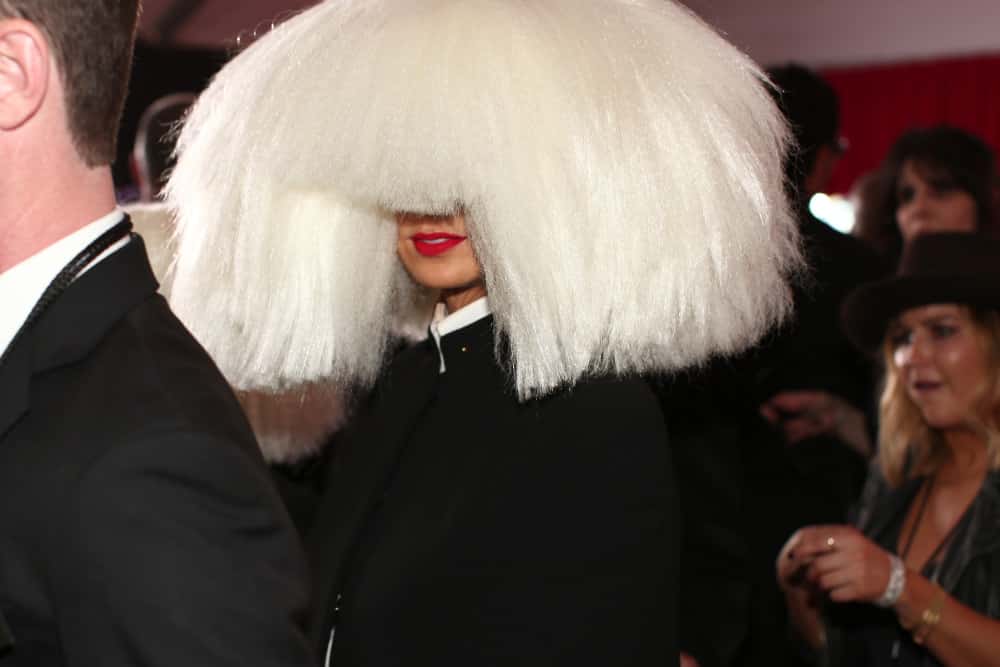 Sia wins again and makes songwriter Herstory: she recently won the APRA Songwriter of the Year Award, for the third successive time. “This is an unprecedented, and very likely, a never-to-be-repeated achievement by one of our most talented songwriters,” enthuses APRA CEO Brett Cottle. Her hit single “Chandelier” also snagged the Song of the Year Award, a work she collaborated on with her co-writer Jesse Shatkin.

There was no Sia to grace the stage to receive the award. A video recording of her friend Pete Wentz decked out in her iconic chin-length platinum blonde wig received the award in her stead, speaking in the first person. “I am the [bleep] Michael Jordan of the APRAs. He won three. And then three more. Hopefully I’ll do that too.”(We guess it’s safe to assume he’s speaking as Sia.)

Sia may have had her face snapped countless of times int he past, but has made the decision to not show her face in her photo-shoots, interviews, and even the red carpet anymore. Her live performances have her facing the stage instead of her audience, and she’s employed a number of items from an enormous platinum blonde wig to a paper bag with a sketch on it to hide her face. (and in the above case, Pete Wentz.)  Her iconic blonde wig, though, is people are recognizing as her call sign, and the artistic decision has served her well.

Many critics have accused her of copying Lady Gaga and being eccentric to gain attention, but nothing could be further from the truth. Sia has adopted the practice to avoid being recognized by regular people to protect her private life, and so far, it’s working. She’s also published an Op-Ed entitled “My Anti-Fame Manifesto“, expressing her distaste for the invasive “mother-in-law” of fame, and how a fandom family who encourage her and boost her up is “all the family I’ll ever need.”

Good for you, Sia.

Now that the election results are almost final, we all want to ask what’s going to happen to Donald Trump after leaving the office? All US Presidents inevitably reach the point where they leave the White House.  Besides, the constitution states that all US Presidents are subject to a two-term limit. What do former presidents… END_OF_DOCUMENT_TOKEN_TO_BE_REPLACED

This is the first time in modern history that the US held presidential elections in the middle of a pandemic. In truth, the US elections may have overshadowed COVID-19 and the side effects are limitless. America is facing a tough crisis of discontentment with the current administration. An understandable case but a situation that may… END_OF_DOCUMENT_TOKEN_TO_BE_REPLACED

America’s political climate has been seeing records of changes over the past few decades. However, US election results record a list of surprising firsts for the first time in a long time. With the power of the youth overpowering the US election results, we see how differently they see the world. It shows how inclusivity… END_OF_DOCUMENT_TOKEN_TO_BE_REPLACED