Authorities have begun to warn “Star Wars” fans from real-life Tatooine, as ISIS activity has been spotted near the area.

CNN reports that two cahces of armaments were discovered  in the area this month, which included rocket-propelled grenade launchers, more than 20,000 rounds of ammunition, and more. 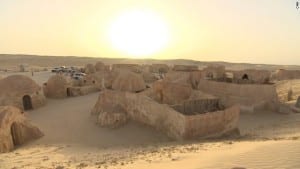 Tatouine itself may not have been used as a filming site, but it is very close by to the set for the slave quarters for “Star Wars: Episode I The Phantom Menace,” where a young Anakin Skywalker is raised by his mother Shmi in one of the many mud huts dotting the sandy landscape. According to StarWars.com, the slave quarter was originally set to be called Utapau, but was the name was later changed to resemble the Tunisian location more.

It is one of the many “Star Wars” pilgrimage sites for fans the world over, with other filming spots scattered in nearby areas.  However, tourists are now being warned for their safety against travelling to these sets because of violence and jihadist presence. The British Government has even raised an “all but essential travel” flag on the location including Tatooine, Nefta, and other film set sites. A Ban has been placed in effect on any Tunisian male under the age of 30 to travel to Libya without proper proof of residency and employment.

In the past weeks, ISIS members and sympathizers have vandalized Tunisian museums and libraries, destroying over hundreds of ancient books, texts, and preserved historical art.  Unesco decried this outrage as “one of the most devastating acts of destruction of library collections in human history.”

Dangit, ISIS, this is why we can’t have nice things.

Man Known As “Angel of death” Fights Against Islamic State