Taco Bell is known for pushing the limits of Mexican fast food. Most recently, the fast food chain has delved into the breakfast scene. With an eclectic menu of waffle tacos, mini Cinnabon nuggets and cinnamon flavored coffee, the newest morning experiment will turn a breakfast classic upside down.

Introducing the biscuit taco, a biscuit shaped like a taco filled with the customer’s choice of fried chicken or sausage topped with jalapeno-honey sauce. The new menu item will replace the waffle taco next week. Surprisingly, the waffle taco has had a lackluster performance. You just can’t make a waffle into a taco, you just can’t. Thankfully, we will all be able to enjoy fried chicken for breakfast. 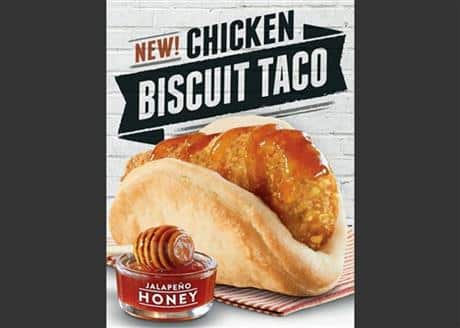 Taco Bell’s breakfast venture is proof that the company has its eyes set on being the leader of breakfast fast food. McDonald’s has held that title for years. Coincidently, the golden arches introduced a chicken biscuit a while back and customers have loved it.

The new menu items aren’t Taco Bell’s only arsenal to attack its competitor. The company will release new advertisements that will describe the Mcmuffin as a boring breakfast food for brainwashed people. The ads will feature people embarrassingly admitting they “used to be a fan of McDonalds.” This type of marketing is not a new tactic. In the past, the chain released commercials featuring men named Ronald McDonald talking about how much they loved Taco Bell.

McDonalds didn’t take this lightly. They shot back by tweeting a picture of Ronald McDonald petting a frail chihuahua. The chihuahua was once the mascot of the Mexican restaurant.

If the thought of the biscuit taco has your mouth watering, you just have to make it to Thursday. “Starting Thursday, people can get it filled with options like eggs, sausage, cheese or deep-fried chicken and jalapeno honey sauce. It has between 370 and 470 calories, depending on the fillings.”

Mark you calendars and live mas.

Taco Bell Is At It Again: Cap’n Crunch Donut Holes