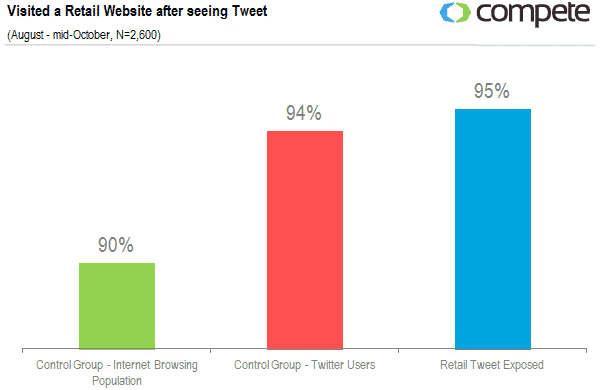 Twitter is used by millions of online retailers and according to a new study, it helps drive traffic and sales for e-commerce websites. The study was put together by Compete which looked at the influence of tweets on online shopping.

2,600 Internet consumers in the US were observed who had seen tweets from over 700 different retailers between August and mid-October. Mobile phone or tablet activity was not included as researchers focused on desktop use only through the Twitter.com platform (no third-party apps).

When it came to users who saw tweets from retailers, they were found to be 95 percent more likely to visit a retail site compared to 90 percent across general Internet users. This information proved valid on specific niche sites, not just mass retailers such as Amazon or Walmart.

The study also found that Twitter users who saw tweets from retailers are 39 percent more likely to make an online purchase, while just 27 percent of general Internet users are likely to purchase from a retail site.

These findings come fresh off of Twitter’s announcement that it’ll be giving away $1 million in free credits to small businesses on Saturday, November 24th. For new advertisers, especially online retailers, it’s a great opportunity to try out Promoted Tweets or Promoted Accounts.

The moment he was inaugurated, immediate changes made by Biden made headlines across the country. These are many of the controversial issues and topics that were shunned and ridiculed by the former administration. Americans can finally breathe a sigh of relief that these concerns have finally reached government policies. It seems clear that Biden has been… END_OF_DOCUMENT_TOKEN_TO_BE_REPLACED

Presidential pardons are one and many in the history of the US. There are many times when US Presidents granted reprieves for their citizen’s misdeeds. The US President may grant a pardon for any individual, including himself, for any crimes done against the country and its citizens. This issue of Presidential pardons has been trending… END_OF_DOCUMENT_TOKEN_TO_BE_REPLACED