Justin Bieber, dubbed “the King Joffrey of Pop”,  got it real good with the taping of his roast over at Comedy Central. Kevin Hart played roast master, and the audience cheered as the zingers and drinks flowed free and wild that night.

Guest celebs and comedians held no punches as they delivered their own brand of scathing comedy that night. Hart was the first one in, declaring it was high time “Bieber got the @ss-whooping he deserves.”

Everything about the Biebs was fair game that night: his Belieber fans, his driving skills, even his purported cool cred. even his manager Scooter Braun was not safe from the jokes last night, with Hart sending one his way for having discovered Bieber trawling Youtube in the middle of the night. “You need to be in jail, Scooter,” cracked Hart.

Everyone on stage that night also gave as good as they got. Martha Stewart, an pleasant surprise onstage, cracked her best ones in the direction of Snoop Dogg (“He made brownies with me on the show and gave me a recipe, and in fact I ate three of them before coming to do this roast”) and Bieber (“Settle down, bring some balance into your life. Find yourself the right gal. She’ll have to be very special. She’ll have to be someone on your level, powerful and famous and rich. Someone you can smoke a joint with or indulge in the occasional three way. I’m talking about a player in the boardroom and a freak in the bedroom. So Justin, call me”).

Another unexpected face onstage was Shaquille O’Neal, and he also got down with the jail jokes: “Justin is worth $200 million, and in prison, that’s worth four packs of Kool.”

Justin Bieber laughed along with all the jokes, except with a few digging on the recent passing of Paul Walker. Even audience membersboed it off. the Paul Walker segments will be cut from the Roast Broadcast. 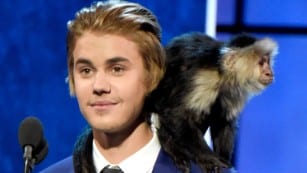 At the end of the five-hour long laughfest, Bieber took the floor and tossed in a few self-deprecating quips about his smoking in a private plane, among other things. He also acknowledged that he’d been upsetting a lot of people, and vows to change for the better.

“… I look forward to being someone you’re proud of. … I’m excited to see what’s next.” Looking straight into the camera, he promises this: “You have my word — I will not end up broken, pathetic, bitter or sitting on someone else’s roast. I’m at a moment of change. This is a new day.”

Justin Bieber Gets Roasted: What To Expect [Watch]