Lee Kuan Yew, the founding father of Singapore and who iron-fisted it from a backwater colonial trading post to the Asian seat of economic power, passed on quietly in his room in the Singapore General Hospital int the wee hours of Monday morning. He was 91.

An official statement was released from the prime minister’s website, with a note on arrangements for the public to pay their respects to be announced later.

Mr. Lee served as the country’s prime minister in 1959, when Singapore gained autonomy and full self-government from the British, until when he stepped down in 1990. He remained the driving force behind what came to be known as “a First World oasis in a Third World region” well into the autumn years of his life.

In 1965, Singapore later separated from Malaysia, an event Mr. Lee realized would pit his efforts against the looming problems of this fledgling country: a lack of natural resources, potentially hostile international environment, and a mix of Chinese, Malay and Indian ethnicities that did not always see eye-to-eye.

His reputation preceded him as someone unsentimental, unrelenting, and controversial, and yet he was also someone who was pragmatic, incorruptible, forward-thinking, and inventive. He was severely criticized by many with his iron grip on power, his tight reign on free speech, and how his courts would target potential political opponents. Whatever his detractors have said about him, his efforts have made Singapore into the strong Asian superpower it is today. 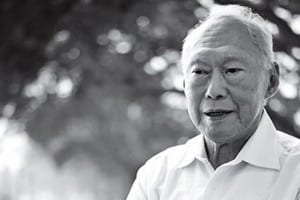 “He fought for our independence, built a nation where there was none, and made us proud to be Singaporeans. We won’t see another man like him,” his son Prime Minister Lee Hsien Loong expresses in a televised tribute.

“To understand Singapore and why it is what it is, you’ve got to start off with the fact that it’s not supposed to exist and cannot exist,” he shares in a 2007 interview. “To begin with, we don’t have the ingredients of a nation, the elementary factors: a homogeneous population, common language, common culture and common destiny. So, history is a long time. I’ve done my bit.”