Odin Camus was supposed to have a fun 13th birthday. He and his mom Melissa were set to go bowling, his favorite sport, at an open bowling event at Lakeview Bowl in Peterborough..  They sent out invites, hoping people would drop by, wish him happy returns, and join in the fun — an no one RSVP-ed.

March 20 was a sad day for Odin — and then Twitter took it, and turned into something he and his mom would remember for a long, long time.

PTBOCanada.com was the first to rally an effort to make Odin’s birthday extra-special. They posted his story, as well as his mom’s announcement on Facebook: 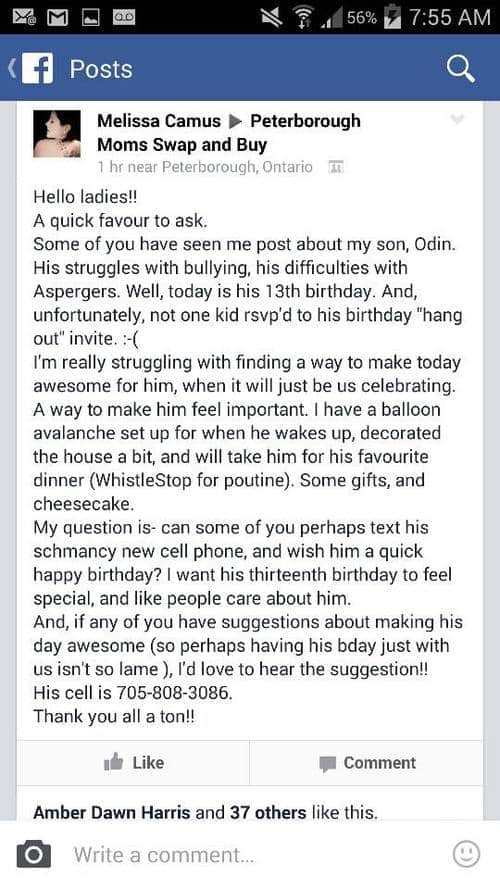 The denizens of Twitter did him one better, and #OdinBirthday took the Internet by storm.

#Ptbo is throwing one heck of a birthday party for #odinbirthday right now, eh. (pic via @CWalker1015) pic.twitter.com/ybcjbBoknJ

What a night! Awesome turnout for an amazing guy. #odinbirthday pic.twitter.com/EbwgeFHMJa

A little girl made this cake and dropped it off! @Ptbo_Canada Is the best city in the world!! ❤️ #odinbirthday pic.twitter.com/iIzHLE9mu1

Odin is living with Asperger’s Syndrome, an autism spectrum disorder characterized by difficulties with social interaction and communication. Because if this, he’s had trouble making friends and has been bullied on occasion  his mom shares on Facebook.

On the night of his birthday, Odin rolled up to Lakeview Bowl to see the place packed with Peterborough residents and twitter users from other areas, there to wish him a happy birthday and give him the birthday party he deserves.

A number of personalities also wished Odin many happy returns: