If you found yourself clapping along to that short riff up there, be ready for even more coolness: Jim Henson’s classic hit series “Fraggle Rock” is getting the live-action full-length feature film treatment, and Joseph Gordon-Levitt has jumped into the wonderful project, hook, line, and proverbial sinker. Zowee!

Joseph Gordon-Levitt is set not only to star in the movie, but is also now a producer of the film. Sources report he is absolutely stoked to work with Lisa Henson, as he is a big, big fan of Jim Henson’s works. 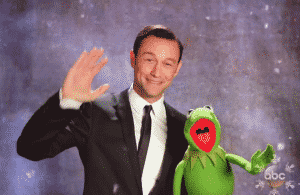 “The first screen personas I ever loved were Henson creations, first on Sesame Street, and then on Fraggle Rock,” JGL shares with Variety. “Jim Henson’s characters make you laugh and sing, but they’re also layered, surprising, and wise. From Oscar the Grouch, to Yoda, to the Fraggles. I’ve never stopped loving his work, even as a young frisky man, and on into adulthood. Collaborating with Lisa Henson makes me confident we can do something that Jim would have loved. I’m grateful and excited to be working with New Regency on this project.”

There hasn’t been a lot of news yet about this project, but Joseph Gordon-Levitt is going to be pretty busy this year. He’s set to play Edward Snowden in Oliver Stone’s upcoming thriller “Snowden,”  which will hit US cinemas sometime around Christmas. He’ll next star in Robert Zemeckis’ “The Walk”, and is also cast in an as-of-yet untitled Christmas comedy together with Seth Rogen, Anthony Mackie, Lizzy Caplan and Jillian Bell.

Fans ask, when is he coming out with his own take on Neil Gaiman‘s epic “Sandman” series? According to sources, progress is steady but sure. We’ll hold you to that, JGL.

Have some nostalgia on us with the show’s opening song: