Wiz Khalifa Failed Miserably In Catchphrase On ‘The Tonight Show’...

What rock is Wiz Khalifa living under?

Jimmy Fallon and friends: Jim Parsons, Miles Teller, and Wiz Khalifa were rounded up to play Catchphrase on ‘The Tonight Show’ this week. Everything was going according to plan, clues were given, and answers were yelled correctly, until Miles Teller tried to get his partner, Wiz Khalifa to guess “Shake It Off.”

His reaction was a beautiful mixture of fear, laughter, and “oh sh*t.” He probably knew this was going to follow him around for awhile. Like, look at his face… 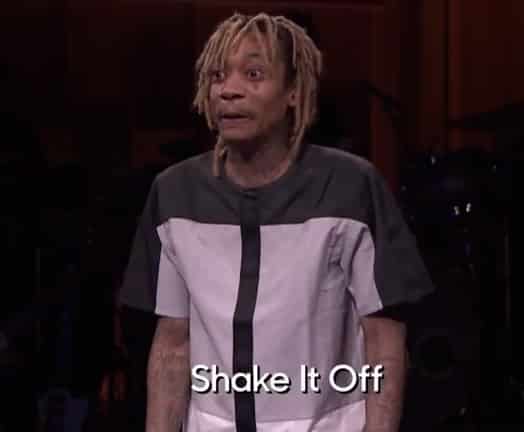 In reality, Wiz Khalifa does not give off the ‘I listen to Taylor Swift regularly’ vibe, but come on. Hasn’t this Swift single hit just about everyone on planet earth? We shouldn’t be surprised that Wiz doesn’t know the answer, we should impressed. It takes talent to avoid that song.

It’s okay, Wiz. Just shake it off. Watch below.