Seinfeld May Be Streaming Online Soon

The best of the 90’s are indeed coming back. First, you had the awesome news that “Friends” is now good to stream, courtesy of Netflix. Now, here’s another excellent reason to butter your popcorn: NBC’s “Seinfeld” is about to be available at one of your favorite online streaming services.

It seems that Sony Pictures TV, a unit of Sony Inc. who owns the rights to the comedy sitcom-slash-stand up routine, has been looking around for the best service to house all 180 episodes. A smart move too, considering the success rates of well-loved TV shows (such as “Gilmore Girls”) that have migrated online. We’re pretty sure a good number of you readers out there have cozied up to watch a rerun or two (or three, or a dozen, or most possibly, enough to have lost count) on a number of TV channels, but having it streaming online certainly beats having to lug around your beloved DVD box sets of “Seinfeld” on your next long flight. 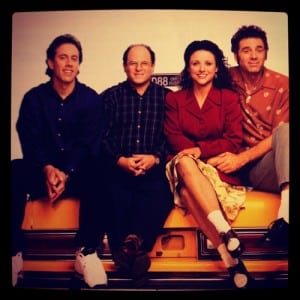 Alas, Netflix has passed on Seinfeld (gasp!) Hulu, Amazon, and Yahoo! Screen, however, are very interested shoppers, and bidding are on-going for “Seinfeld”‘s streaming rights. Who ever does win the bid best be ready to back up their claim with a good bank account: according to The Wall Street Journal, buying just one episode of “Seinfeld” will set you back by a cool $500,000 a piece.

Netflix acquired the streaming rights for “Friends” from Warner Bros. by paying about the same amount for every episode. Sony, however, is seeking to do them one better and sell the rights to their “Seinfeld” episodes for a higher price. We see what you did there, Sony, very sly.

“Unbreakable Kimmy Schmidt” on Netflix Will Rock You

Seinfeld + The Ring = The Horror Movie About Nothing Scary (Video)