Meet Super Sikh. He is a crime-fighting, Taliban-hating, Elvis-loving, turban-wearing superhero, who could provide a sense of pride to Sikh children. Comic creator, Supreet Singh Manchanda is the mastmermind behind the new character. He got the idea after asking a group of Sikh children who their favorite superhero was. He heard replies such as Batman, Superman and other run-of-the-mill names. The Guardian reported that when asked if they would like to see a Sikh hero, the children lit up.

“And then we asked them, ‘Would you like to see one?’ The looks on their faces was just priceless,” says Supreet Singh Manchanda, a technology executive and comic creator based in San Francisco. “They just beamed.”

With that revelation, Manchanda knew that he had to create a superhero for those children, thus Super Sikh was born. Created by Manchanda and Eileen Alden, an Oakland-based screenwriter, “the series follows Deep Singh, a 20-something turbaned superhero, as he makes a trip to Graceland while fighting off his enemies who want him gone. The creators describe him as Batman meets Jason Bourne.”

Not just fighting criminals, but specifically the Taliban, Singh is shown in the intro of the series in a turban and aviator shades as he foils the Taliban’s plans to burn books outside an Afghanistan girl’s school.

The creator’s are quick to point out that Singh does not have super powers. “[Superheroes] have to have this mutation or something of the sort that makes them abnormal and therefore they get some powers. He’s trained, he’s educated, he’s multicultural,” Manchanda explains. “He wants to emphasise to their young readers that the character is not so different from them. This can be you and that’s a very powerful message.”

The unique series is set to be a hit in the Sikh demographic, however funding was needed. The creators set up a Kickstarter campaign, but they never imagined the support they got. 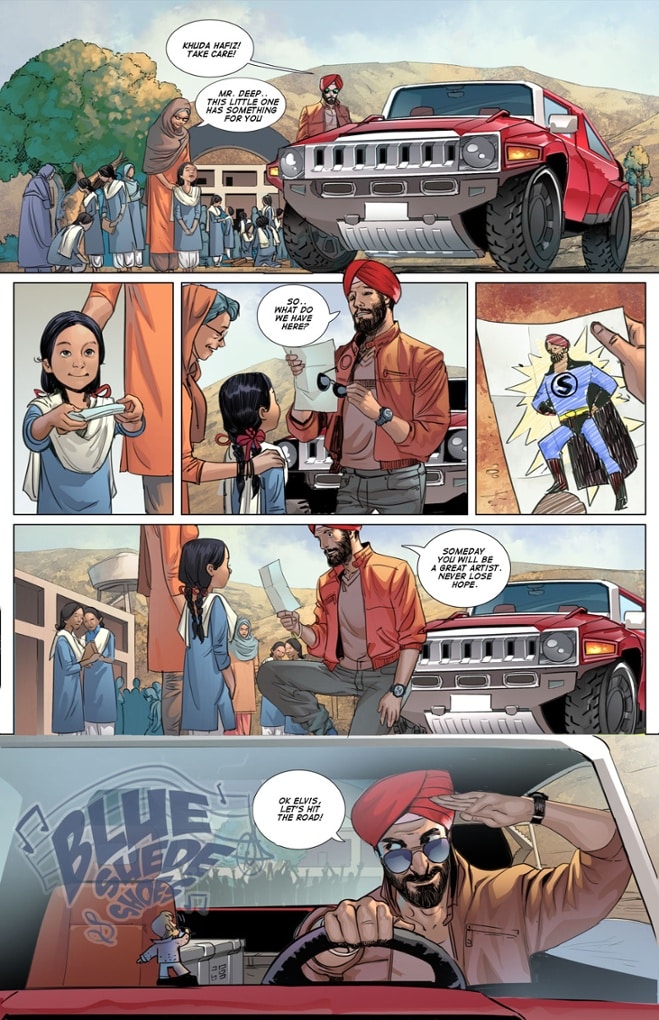 The first issue was previewed at San Francisco Comic Con and received great reviews. It has also already been downloaded all over the world. You can read more about the series in The Guardian’s exclusive interview with the creators.