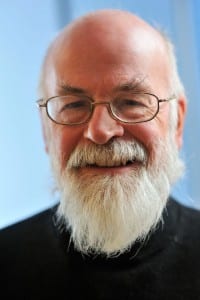 In the quiet of their home, surrounded by his friends and family, Sir Terry Pratchett had at last taken Death’s hand, “with his cat sleeping on his bed.” He was 66.

Sir Terry Pratchett had authored over 70 books and created the expansive and satirizing universe of the Discworld series. His works have been translated into 37 languages, and continues to enchant and tickle the minds and funny-bones of readers the world over with his spry humor, great inventiveness and heart. His very last work was just completed last summer.

Pratchett had long battled with Alzheimer’s Disease, a topic that he was openly frustrated over and called “an embuggerance” — and then chose to address the more humane and difficult question of death through a controversial BBC documentary, “Choosing To Die”.

Rumors have circulated that he passed on via assisted suicide, though media sources, publishers and associates say he did not take his own life.

He leaves behind his wife Lyn and daughter Rhianna Pratchett. Rhianna takes after her father in writing game plots (Mirror’s Edge; Overlord; Tomb Raider 2013) with the same heart and biting dark humor distilled from her father. She tweets: “Many thanks for all the kind words about my dad. Those last few tweets were sent with shaking hands and tear-filled eyes.”

Terry took Death’s arm and followed him through the doors and on to the black desert under the endless night.

Author Neil Gaiman was also struck with grief at the passing of his dear friend. Gaiman co-authored the riotous end-of-the-world adventure comedy “Good Omens” with Pratchett, and recounts a fond and intimate memory when Pratchett’s anger drove him forward to get things done.

“There was nobody like him,” Gaiman writes on his blog. “I was fortunate to have written a book with him, when we were younger, which taught me so much.”