The hit AMC series, ‘Breaking Bad’ has amassed a huge fan following. Thousands have embarked on a trip to New Mexico to visit the locations used in the filming of the TV show. One of the most popular destinations, the house used as Walter White’s home. The only problem is the house is really someone’s private family home.

Frances Padilla and her family have lived in the now-famous house for more than 40 years, but now ‘Breaking Bad’ fans are making it unbearable and impossible to live a normal life.

“Most people are respectful. It’s the few idiots that come that think they’re entitled to do whatever the hell they want, and it’s not going to happen,” Padilla said. “If you’re going to be a jerk, stay the hell away.” 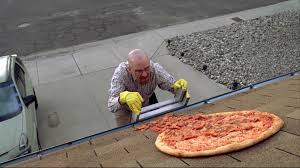 In fact, one specific scene from the show is making things extremely unusual. During one episode, Walter White gets frustrated and throws a pizza on his roof. For some strange reason, fans want to recreate the scene and throw pies on the Padilla’s roof.

The problem has gotten so bad that the creator and cast of ‘Breaking Bad’ have stepped in to urge fans to stop. On a podcast about ‘Breaking Bad’s’ prequel, ‘Better Call Saul,’ creator, Vince Gilligan explained the problem to fans and he had choice words for the guilty ones.

“I want to open with a bit of a downer. They are throwing pizzas on roofs and stuff like that. Let me tell you, there is nothing original or funny or cool about throwing a pizza on this lady’s roof. It is just not funny. It’s been done before. You are not the first. We love our fans. I don’t love those fans. I don’t even consider them fans. I consider them jag-offs.”

Jonathan Banks, who played Mike Ehrmantraut also joked during the podcast, “If I catch you doing it, I will hunt you down.” Gilligan agreed, “I’m with you, I’m with you brother.”

Despite the pizza problem, Padilla says most fans are respectful and take pictures from the street.

Parody: This Is What Happens When “Breaking Bad” Meets “Frozen”