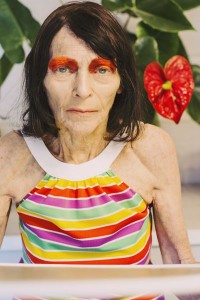 Sasha Frolova, a photographer and actress based in NYC, has created a series of photographs featuring her grandmother recreating fashion runway looks. The colors, the styles, and the mood of the photographs are all fun and games at first, but the message soon hits you in the gut, and makes you ask questions about ageism in fashion.

The series is inspired by questions that Prolova has mulled over in the past few years — questions about herself, how women are viewed in terms of the space they take up, and the feeling that women always have to prove to themselves and others that they do deserve to take up this space.

“It’s interesting to me to hear people’s responses, which have largely implied that I failed at making her beautiful,” Prolova shares. “My intention was never to ‘make her beautiful,’ nor was it to make her ‘scary looking.’ The range of looks were intended to contrast the visuals of the very specific type of models backstage and in magazines who are allowed to wear these looks without viewer astonishment.”

Her experiences with living in New York have also added to the depth from which Prolova takes her photographs. At a very early age, she learned to be independent and sensitive to how people viewed her as a young girl walking the streets. “The way that an older man will look at me if I ride a scooter to class is startling,” she shudders. She also focuses on how normalized the fetishization of girls in culture is, and how this is reflected in the fashion world. 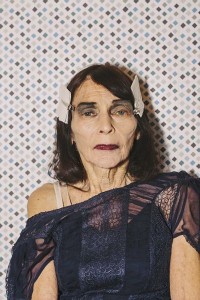 Prolova acknowledges the efforts media has made to bring the beauty of age in women into spotlight. With the recent focus of icons like Joan Didion and Joni Mitchell in luxury brands, It has indeed generated a helthy buzz of discussion online. However, Prolova warns against falling onto the thought that the problem is now “fixed” just because media has finally addressed it.

Her grandmother was at first quite hesitant about being the face of her granddaughter’s series, questioning her qualifications to represent a Fashion Week beauty look. However, after Prolova sent her and her grandfather the photos, thier reponse was heartwarming: “Your grandfather and I thought they were wonderful. His favorite is the mirror picture and I am unable to choose.”