If you walk along Tomas Morato Avenue and Scout Lazcano Street in Quezon City, Phillippines, you just might be able to get your Harper Lee or George R. R. Martin fix for cheap — and help a worthy cause. 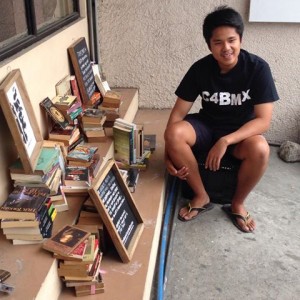 Justin Adriel de Castro, 19, peddles books along these two busy streets with nary but a corner of a bank to prop up his goods on, and small chalkboards extolling the virtues of a life well spent through reading. He has since become a topic of a social media post which has gone viral, and has been dubbed by the Internet as “the boy who cried books”. De Castro’s Facebook page has very quickly gained followers and admirers, and he has shared his story with local leading media circuits.

“If there is something that anyone can have in excess, it’s learning,” de Castro shares. Donned in a humble shirt, shorts, and flip-flops, he will call to passers-by to check out his pre-loved books. There are gems among his stacks, and are often quite a steal with their prices ranging from Php50.00 to Php 300.00.

De Castro hawks these books on the streets to help him reach his dreams of being a lawyer. He ran away from home the day after Christmas 2014 to get away from a painful home environment rife with strife and family conflict. After several attempts to kill himself, he was diagnosed with bi-polar disorder, and after exchanging words with his mother, he was forced to move out of his apartment in New Manila.

In a bid to make a life of his on and stand on his own two feet, he began selling honey on the streets, the very same food remedy his therapists prescribed for him. However, he later on decided to switch to selling books — and from then on, help began pouring in from many quarters.

From the humble 14-book pile he started with, he now carries around 600 titles a day, each one unique and compelling to each potential customer. Every time a possible buyer approaches, he asks them “What is your wolf? What are your problems?”

Facebook Fundraiser Helps Kids In the Philippines Get to School