Bill Murray Kicks It with Rick Ross In Recording Studio

Bill Murray has made quite the reputation for himself popping up in the most unexpected events and places, and what’s not to love? He’s the kind of gatecrasher or photobomber who generally makes it a point to bring a little bit more fun and good cheer into any situation he’s in.

Recently, he’s managed to find himself in Rick Ross’ recording studio, and just generally having a good time with the rapper, along with Paul Schaffer, David Letterman’s long-time music man.

Ross and Murray attended a basketball game where Murray’s son, Luke, played. Murray’s son, Luke — who snapped a more pics of his dad and the rap icon goofing off — is an assistant coach for University of Rhode Island. His team won the game against  La Salle University in Philly on Saturday. Congratulations, Luke!

Here’s some more evidence of Murray living it up with Ross and Schaffer:

Good dude Bill Murray’s unique brand of kookiness has been more than welcome in many fan’s homes, bars, and other random encounters. the internet is rife with tales both true and tall about Bill Murray showing up and doing … something. anything. This meme has made the rounds on the Internet, and should be pretty recognizable to many readers out there: 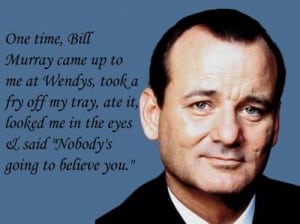 To date, there is authentic evidence of Murray joining a surprised couple’s engagement photoshoot, bartended at SXSW 2010,  sang karaoke with complete strangers at Karaoke One 7 in New York City, did the dishes at the host’s party to which he was invited, and did his fan one better by sending a video of himself walking down a hall in slow motion instead of an autograph.