Leonard Simon Nimoy, multi-faceted artist, best known for breathing life and flesh into the ever-logical Vulcan Spock in the classic sci-fi hit series “Star Trek”, quietly passed on this Friday morning in bed in his home in Los Angeles. He was 83.

His wife, Susan Bay Nimoy, confirmed his passing on, saying he died due to end-stage chronic obstructive pulmonary disease. Nimoy had earlier disclosed to fans on Twitter that he was battling the disease. Despite experiencing difficulties in walking far distances, this did not stop him from continuing to practice his craft and live a full, rich life in the company of family and friends.

His co-stars, William Shatner and George Takei, have tweeted about their grief from the loss of one of their honored peers. 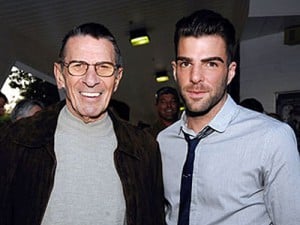 Zachary Quinto, who played the younger version of Spock in both the 2009 reboot “Star Trek” and the 2013 sequel “Star Trek: Into Darkness”, also expressed his profound grief over the loss of his mentor and dear friend. ““I never expected when I got that job and met him that we would forge such a powerful friendship,” Quinto said on an EW Radio show. “I love him, his wife. They’re like family to me, 100 percent. Like second parents, for sure.”

my heart is broken. i love you profoundly my dear friend. and i will miss you everyday. may flights… https://t.co/WPJmt1X4ox

NASA also shared its own musings on the man who inspired them to “boldly go where no man has gone before.”

RIP Leonard Nimoy. So many of us at NASA were inspired by Star Trek. Boldly go… https://t.co/qpeH5BTzQc pic.twitter.com/nMmFMKYv1L

Leonard Nimoy was born to Max and Dora Nimoy, Ukranian immigrants, on March 26, 1931. From the tender age of 8, he started acting in local productions and auditioning in community colleges, where he received most of his Theater training during his formative high school years. After many years of hard work and dedication to the craft, it was in 1966 when Nimoy took on the role of the unflappable Spock in Gene Roddenberry’s timeless sci-fi saga. Roddenberry, the creator of the iconic TV series, called him “the conscience of ‘Star Trek’”.

He was not only an actor, but also an accomplished poet, a Method acting teacher, and a photographer. His work touched on topics close to his heart, and became his creative expression of his Jewish roots.

Mr. Nimoy, thank you very much. You have showed us what it is to live long and prosper. You will be dearly missed.