On this fateful date of February 26, 2015 (or the 27th, depending on wherever you’re globally positioned), the Internet went up in arms and clashed in a heated online debate. Sides were chosen, bets were cast, and many manly tears have been shed. Everyone wants to know just exactly what color this dress is.

It all started with a very sincere and humble question from this user on Tumblr:

People instantly said it was white and gold, but there were voices of dissent that claimed it was blue and black. Banter and arguments spread like wildfire across the Internet, and soon, the #ThisDress reached far and wide into Twitter, Facebook, and other forms of Social Media. #WhiteGold and #BlueBlack continue to duke it out for online buzz supremacy. Some people just want the whole thing to stop.

Celebrities have also thrown in their chips with this dress. Taylor Swift was momentarily befuddled before declaring her position on the Blue-Black team.

Along with the rest of Hollywood.

I’m Seeing Blue And Black, As Of Now

That fucking dress is BLACK and BLUE! Is everyone else on drugs? — Frankie Muniz (@frankiemuniz) February 27, 2015

If that’s not White and Gold the universe is falling apart. Seriously what is happening???? — Anna Kendrick (@AnnaKendrick47) February 27, 2015

The dress is Teal.

And for everyone asking I see blue and black — Justin Bieber (@justinbieber) February 27, 2015

@thecolorated its periwinkle and sand

Some others were just in the grips of anticipation to see how #ThisDress will all end. In flames, probably.

From this day on, the world will be divided into two people. Blue & black, or white & gold. https://t.co/xJeR7GldwP pic.twitter.com/i6BwVzPzSZ — Ellen DeGeneres (@TheEllenShow) February 27, 2015

I find it ironic that Kim K got naked to break the Internet and it was a dress that did it.

Other companies chimed in on the matter:

*stops furiously scribbling amidst dozens of coffee cups* there is no dress. it is not the dress that changes colors, it is only yourself. — Denny’s (@DennysDiner) February 27, 2015

American Congress couldn’t bear to stay on the sidelines on the issue, either:

I know three things: 1) the ACA works; 2) climate change is real; 2) that dress is gold and white.

Just asked my Legislative Director at 10:30 pm to draft a House resolution tomorrow about the dress being black and blue. AMA. — Mark Takano (@RepMarkTakano) February 27, 2015

Thought I had a reasonable understanding of what Twitter is/can be used for. Especially for an 88-year old. But here we are, with a dress.

And the sports world stood still for this dress:

gold/white RT @voxdotcom: This dress is tearing internet apart and we can’t explain it (yet): https://t.co/UnZpz7MCf0 pic.twitter.com/LkfeQ5A5Bl

The denizens of Tumblr had a few interesting things to say about the phenomenon: 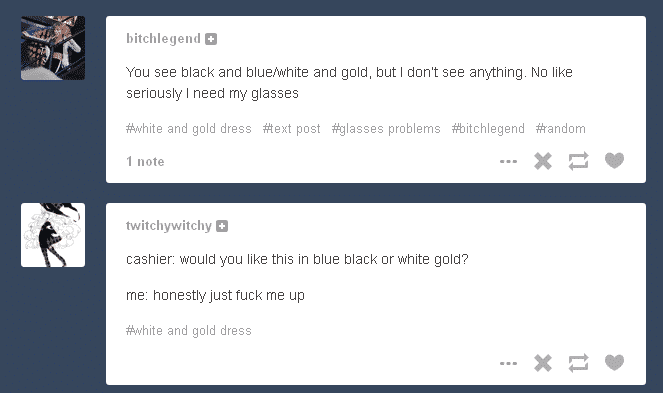 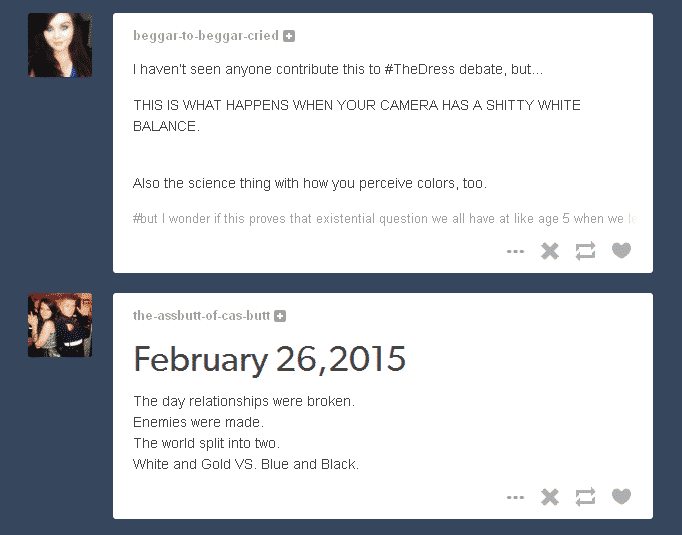 Thankfully, the Science Side of Tumblr intervened for us: 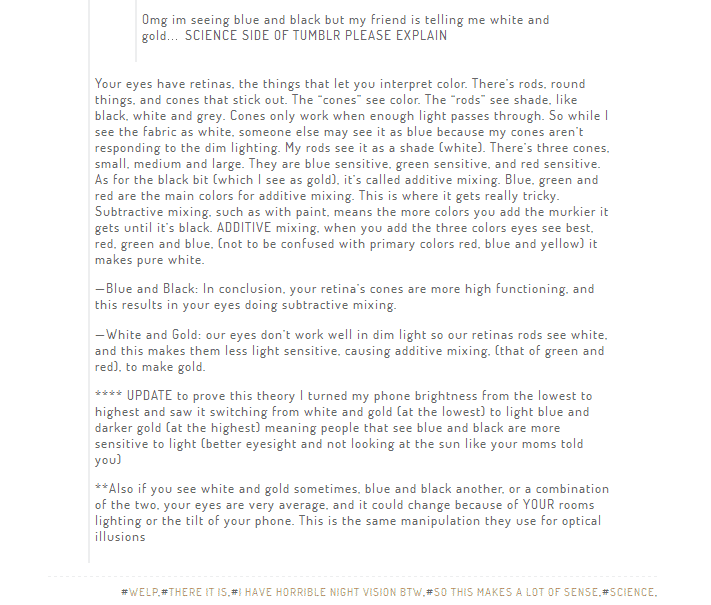