She came to this year’s Oscars dressed and tressed to the nines. No diss slung her way would ever take this queen down. 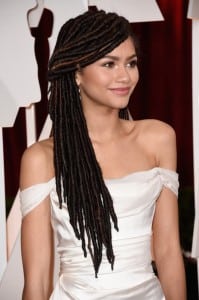 Eighteen-year-old lissome beauty Zendaya Coleman came to the 2015 Oscar Film Awards dressed resplendently in a chic, slinky Vivienne Westwood number, and wore her locs on the red carpet. Unfortunately, her locs became a target for snide comments coming from the direction of the Fashion Police.

Fashion Police, once hosted by the late Joan Rivers, is known for its scathing and acerbic humor as its pokes fun at celebrities’ outfits and makeup throughout the week. However, this was one line that Rancic should never have crossed.

Other stars and fans flocked to her defense on their respective social media avenues.

Look I understand who Joan Rivers was & what #FashionPolice is, but that joke was aimed at a stereotype of a culture of a people. #Zendaya

Dear @Zendaya, I’m sorry I offended you and others. I was referring to a bohemian chic look. Had NOTHING to do with race and NEVER would!!! — Giuliana Rancic (@GiulianaRancic) February 24, 2015

As if the blows were not enough, Rancic’s co-host and fashion diva Kelly Osbourne issued a statement that she would not stand for this, and threatened to leave Fashion Police:

I DID NOT MAKE THE WEED COMENT. I DO NOT CONDONE RACISM SO AS A RSULT OF THIS IM SEREIOULSY QUESTIONONIG STAYING ON THE SHOW!

I WILL NOT BE DRAGED INTO THIS! The situation is being rectified like ADULTS by both parties. I hope you can leave it to them & do the same!

you guys do realize that @Zendaya is my friend right? — Kelly Osbourne (@KellyOsbourne) February 24, 2015

Rancic at last formally apologized on national television for her disparaging comments. “I just want everyone to know that I didn’t intend to hurt anybody,” she says, “but I have learned that it is not my intent that matters; it’s the result. And the result is people are offended, including Zendaya. and that is not okay.” Watch her televised apology here.

Good for you, Giuliana. This is what it means to take your mistake and turn it into an important learning experience in life.

Zendaya graciously accepted her apology and took the opportunity to further spread awareness on the importance of cultural sensitivity, and how easy it could be to make off-color remarks.she quotes Dr. Martin Luther King, Jr: “Darkness cannot drive out darkness, only light can do that. Hate cannot drive out hate, only love can do that.”