Remember the Addams Family? the grim, macabre, and extremely loving family we all came to adore? They first came out in one-panel comic strips in The New Yorker in the late 1930’s, graced the TV screens of American families in the 1960’s, and enjoyed a revival and loyal following since their own deliciously dark and quirky comedy feature film in 1991. Today, fans and pop-culture-savvy folk alike time their snaps and deadpan faces whenever they hear the first bars of the theme song play. Also, Gomez + Morticia = “#relationshipgoals”. 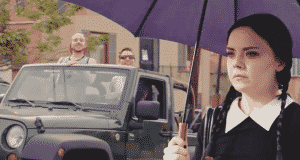 What of them now, though? Not much is known about the whereabouts of Pugsley, Cousin It, or Thing, but we certainly know what became of Wednesday Addams. Their little girl is back and all grown up, and she’s ready to deal some good old homegrown poetic justice. She certainly does her parents and the whole Addams family tree proud.

Wednesday Addams comes across a couple of unsavory catcallers cruising along the streets of San Francisco in their humongous Hummer. They make the poor, poor decision of slinging a number of vile statements at our black-frocked, braided protagonist, and speed off cackling as they go. Fortunately, Wednesday gives as good as she gets, and certainly knows how to make a vengeance worth her time. [watch]

The Youtube series Adult Wednesday Addams is created, written and casted by the multi-talented comedienne Melissa Hunter. The web show debuted in 2014, and is now well into its new seven-episode season. It instantly became an overnight success, and has enjoyed much praise and cheers from Buzzfeed, NYLON, HelloGiggles, and the Huffington Post, to name a few. Close to 5 million views and 150,000 YouTube subscribers, that’s certainly something to sit up for.

Cheers to you, Melissa! You’ve created a new icon for 2015 who speaks for women everywhere: be irrevocably and unapologetically yourself, don’t take crap from anyone, and be able to serve revenge with five-star class.

Drunk Moms Talk About Their Kids in Viral Video [Watch]