It was a very emotional day for all those people involved in Glee as they recorded the final episode of the final season two days ago, February 22.

Our social media platforms have been clouded with fun memories from the show over the past six years. Most, if not all, of the members from Glee over the years have been saying plenty of emotional things over the past few days, but Lea Michele hit home for everyone as she posted the tweet below.

The photo shows Lea Michele walking off the lot with Cory Monteith’s football jersey which he wore most of the show while playing the front man and Lea’s boyfriend on and off set as Finn Hudson. Before the football jersey tweet, Lea had posted a long message thanking pretty much everyone she came into contact with as Rachel Berry. 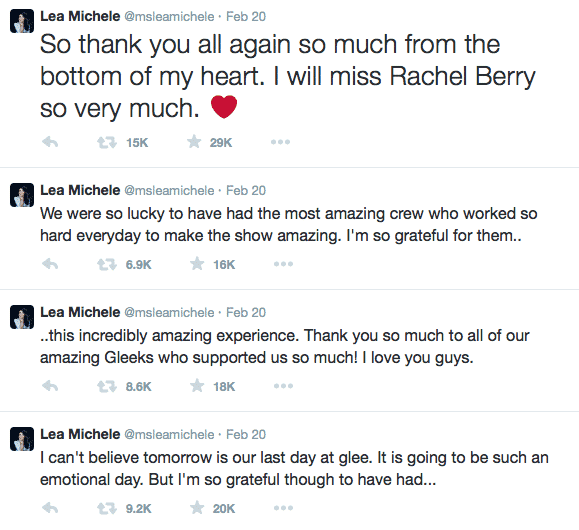 Take a look below at some of the other memories the Glee cast has been posting.

It has been my sincere honor to portray Mr. Shuester for the last 6 years. Today, I slip out of the sweater vest forever. #ThankYouGleeFans

That's a wrap! It's been the most amazing journey and I couldn't pick a better group 2 share this with. I love you all forever & ever amen!

… And the Glee Club has left the building. Thanks McKinley High, seeya on TV.

Thank you all for your enthusiasm, your hard work, and your kindness. I'm so proud and feel so fortunate to have been a part of this family.

Today is my last day of working on #Glee. Along with the entire cast, crew, and production team. It has been the privilege of a lifetime…

Never can say goodbye! Back at @GLEEonFOX one last time to shoot a final musical number with everyone! So many amazing people here today!

And that's all folks. That's a wrap on Glee. Couldn't have done it without ya 🙂 pic.twitter.com/eemP50BYE0