Lady Gaga Completely Slayed Her “Sound Of Music” Tribute At...

There are not enough synonyms for the word captivating to perfectly describe Lady Gaga’s Oscar performance last night. Her Sound of Music tribute was the most emotional part of the 87th Academy Awards. Comedian Steve Martin couldn’t even find a funny thing to say about it either.

After Gaga’s performance, Julie Andrews hugged her and it is completely okay if you got emotional like I did. 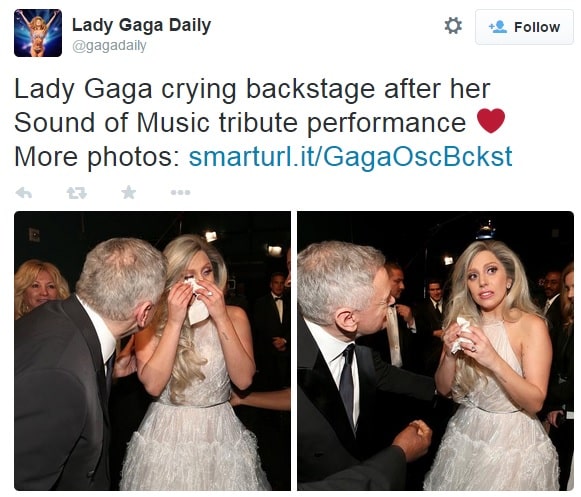 Watch her incredible performance below.

YES GAGA.
Show them your CHOPS!

I fully support a revival of Sound of Music with Lady Gaga.

Omg @ladygaga you are so incredible! #julieandrews

It is about a talent that has no boundaries..@ladygaga

The @ladygaga #SoundOfMusic medley is the best thing I've ever seen. @ladygaga you can do anything and I'm floored by you #Oscars2015

Every one else praised Gaga.

Will @ladygaga's Sound of Music tribute be available to download so I can just spin around my living room all day?

Doesn't matter what you think of @ladygaga, pulling off that #soundofmusic number in front of the #oscars crowd was impressive

Still in awe of Lady Gaga's tribute to the Sound of Music at the #Oscars last night!

On top of that, the litte monsters who were aware of Lady Gaga’s ability found this as the perfect moment for a “told you so.”

Her Sound of Music montage made me remember that #LadyGaga is a true artist and talent and more than meat wearables.

Yeah, I think @LadyGaga has just slapped all the non-believers right in the face with that performance. #SoundOfMusic #Oscars

You better believe people used this opportunity to bring up The Princess Diaries.

*whispers in ear* "You are the real princess of Genovia, Lady Gaga." pic.twitter.com/Zsyr2F2XLL