by Dan Evon 7 years ago2 months ago

Some works of art are created with paint brushes. Others, like this accidental ice sculpture in North Carolina, was created by the front end of a jeep.

The front of a Jeep left behind an ice sculpture in the parking lot of a medical center near Greenville, NC pic.twitter.com/YKFdiak9qC

According to WITN, the strange formation was found in the parking lot of the Vidant Medical Center on Tuesday afternoon. The news station received two different photos (You can see the other here) from viewers who stumbled upon the car’s imprint in the ice.

The ice apparently formed while the jeep was parked in the lot. And since this accidental ice sculpture also froze to the curb, when the Jeep pulled away this strange formation was left standing on its own. This may look like a one in a million accident but it apparently it’s not that unusual. In fact, WRAL’s Mike Maze posted a similar photo to Facebook last night. 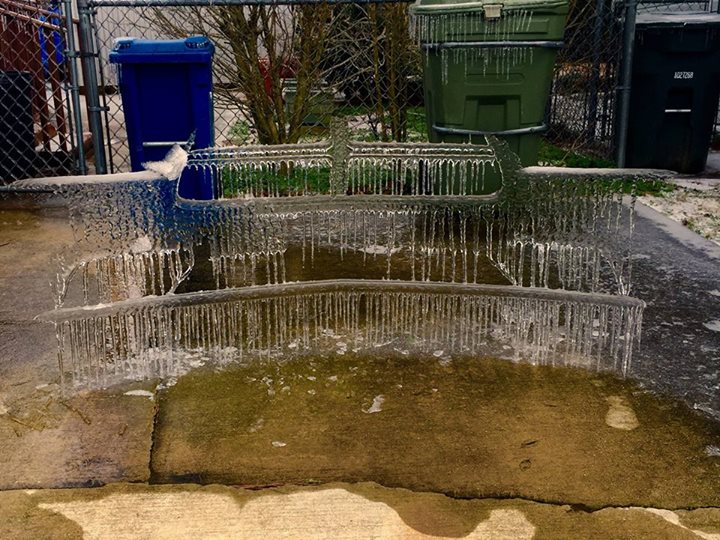 This photo shows the remnants of a Dodge Charger in Fayetteville.

The meteorologist writes: “Stan Bryda of Fayetteville had plenty of ice on his Dodge Charger from Monday’s freezing rain. He was successfully able to peel off the ice from the front end of his car and this is what it looked like. This is his Front End Ice Sculpture. I thought this would make a great Amazing Pic-of-the-Day! Thanks Stan!”