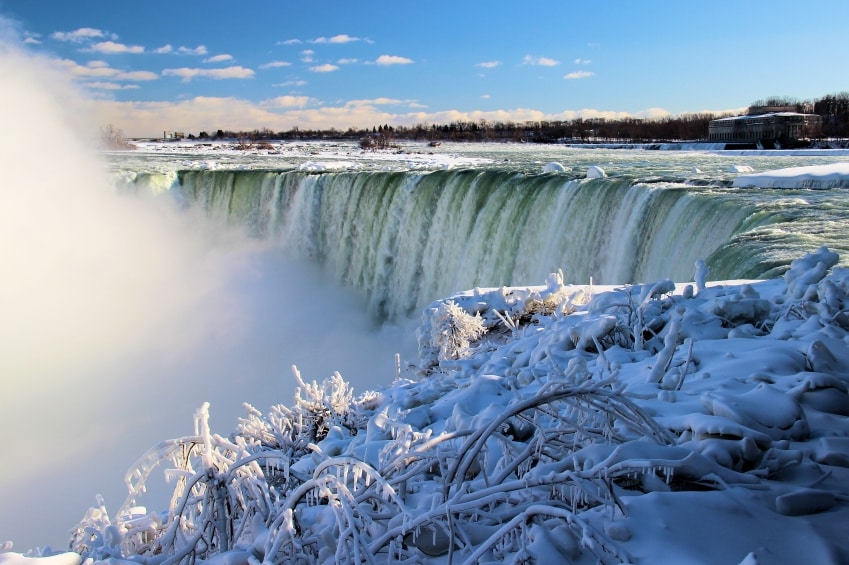 It’s that time of year again. Niagara Falls has frozen over.

The views at Niagara Falls are pretty spectacular during the warmer months but Michelle Blackley, communications & community relations manager for the Falls, said that the site is pretty popular in the winter as well.

“The attention the Falls is receiving is bring a crowd to view them in their majestic, winter splendor!”

Photos of frozen Niagara Falls circulate every year and every year there’s a rumor that the falls are completely frozen. But that isn’t really true. Despite how it looks, there’s still water flowing beneath the ice.

According to Niagara Falls Live, the only time water completely stopped flowing down the falls was in 1848 when there was an ice jam up river.

The flow of water was stopped completely over both falls on March 29th 1848 due to an ice jam in the upper river for several hours. This is the only known time to have occurred. The Falls did not actually freeze over, but the flow was stopped to the point where people actually walked out and recovered artifacts from the riverbed!

Here’s a video of the partially frozen Niagara Falls.

Israel’s Iron Dome has protected the country against missile attacks for years. The Iron Dome in Israel is the biggest of its kind in the world. No other countries in the world use the same air defense system, meaning it is one of a kind. The tension between Israel and Gaza has been going on… END_OF_DOCUMENT_TOKEN_TO_BE_REPLACED

The world is devastated by the news that Britain’s Prince Philip, the Duke of Edinburgh, has died at the age of 99. Palace media confirms that the Duke has expired mid-day today, April 9th. The announcement did not contain any specifics on the cause of death. The United Kingdom will enter a state of national… END_OF_DOCUMENT_TOKEN_TO_BE_REPLACED

Who would have known that religious prophets would be among the most loyal supporters of former President Trump? In fact, it has been observed that the most conservative Christians may have been the right amount of push for Trump’s presidential win back in 2016. Since Trump’s election back in 2016, numerous self-proclaimed “prophets” have been… END_OF_DOCUMENT_TOKEN_TO_BE_REPLACED