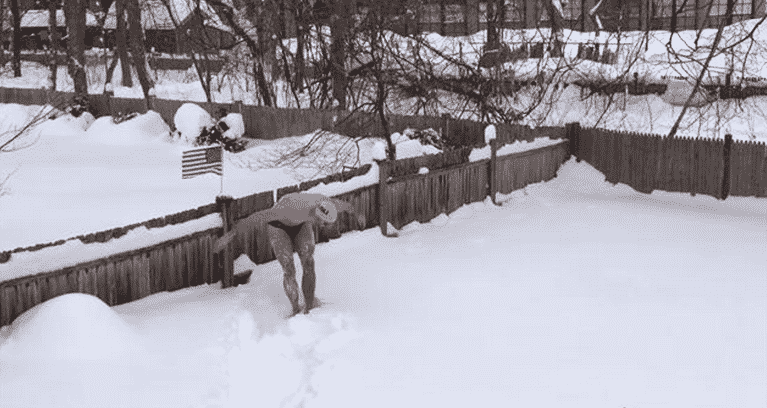 Boston Mayor Marty Walsh would really appreciate it if the residents of Boston would stop jumping out of their windows into the snow.

Boston has seen a little bit of snow this winter and apparently people are dealing with it by leaping out of their windows. While we don’t have an exact number of people who have participated in the #BostonBlizzardChallange, the problem is so prevalent that the mayor of Boston actually addressed the issue during a morning press conference.

The mayor attempted to explain to the people of Boston that they were not living on “Loon Mountain” and that someone could get seriously hurt.

“I’m asking people to stop their nonsense right now. These are adults jumping out windows. It’s a foolish thing to do and you could kill yourself. We’re asking people to act responsibly in the city of Boston. This isn’t Loon Mountain, this is the city of Boston, where we’re trying to remove snow off of the street and it becomes very dangerous. And the last thing we want to do is respond to an emergency call where somebody jumped out of the window because they thought it was a funny thing to do.”

It’s been an interesting week in the northeast. In fact, it’s been so snowy that the Ithaca Tourism Board is actually urging potential visitors to go to the Florida Keys instead. Of course, you probably can’t do this in Florida.

Seems it was just like yesterday when we all fought over and hoarded HEAPS of toilet paper for no reason at all. All the memories are rushing in as the US suffers from a gas shortage. As expected, gas shortage memes are everywhere to bring light to our currently sad situation. Along the US east… END_OF_DOCUMENT_TOKEN_TO_BE_REPLACED

Israel’s Iron Dome has protected the country against missile attacks for years. The Iron Dome in Israel is the biggest of its kind in the world. No other countries in the world use the same air defense system, meaning it is one of a kind. The tension between Israel and Gaza has been going on… END_OF_DOCUMENT_TOKEN_TO_BE_REPLACED

The world is devastated by the news that Britain’s Prince Philip, the Duke of Edinburgh, has died at the age of 99. Palace media confirms that the Duke has expired mid-day today, April 9th. The announcement did not contain any specifics on the cause of death. The United Kingdom will enter a state of national… END_OF_DOCUMENT_TOKEN_TO_BE_REPLACED