House Of Cards Season 3 Was On Netflix Weeks Early,...

House of Cards was set to premiere on February 27, but instead the entire season showed up on Wednesday, February 11 instead. People freaked out, rightfully so.

OMG #HouseOfCards is out. My responsibilities and social life no longer matter. If you need me, take a chill pill because im now BUSY

Season 3 was only available for a short period of time before the House of Cards episodes were taken down just as fast as they were available. People freaked out even more about that.

…And then Netflix pulled House of Cards down. Someone is 100% lying dead in the woods because of this.

Got mad hyped bout that house of cards leak then they took it back like… pic.twitter.com/WXTDinqvbp

The first 10 episodes of the 13 episode season were streaming with no glitches at all. Netflix commented on the House of Cards leak via Twitter.

This is Washington. There's always a leak. All 13 episodes will launch February 27.

Even the creator of House of Cards, Beau Willimon, had a good attitude towards yesterday’s mistake.

If you are interested in what the first 10 episodes (entitled Chapters 27 through 36) are about, you can read the episode summaries below. WARNING: major spoilers ahead.

Again, this will be a huge spoiler. 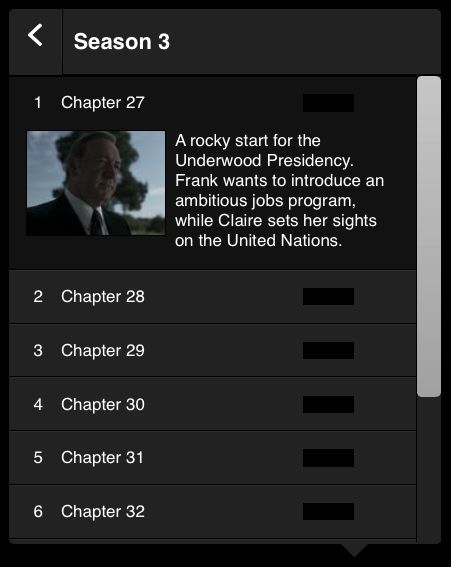 Chapter 27: A rocky start for the Underwood presidency. Frank wants to introduce an ambitious jobs program, while Claire sets her sights on the United Nations.

Chapter 28: Claire’s U.N. bid runs into trouble. Frank fights off mutiny with a bold address to the country.

Chapter 29: The Russian president’s state visit becomes a cold war of wills, and some punks heat things up.

Chapter 30: Claire bypasses Russia at the U.N. Frank tries to outmaneuver a potential challenger and ends up face to face with a higher power.

Chapter 32: Frank and Claire travel to Moscow to negotiate the return of an imprisoned U.S. citizen. Claire takes a stand that jeopardizes their plans.

Chapter 33: The damage is done and the Underwoods must repair it. But deep wounds don’t heal fast, and sometimes not at all.

Chapter 34: A hurricane endangers more than just the entire East Coast and Frank must make a difficult choice.

Chapter 35: The Jordan Valley erupts in chaos just as Frank’s campaign is picking up steam. Claire gets disturbing intel and counsels him.

Chapter 36: Frank needs to deal with Petrov one on one while Claire tries to preserve the peace-keeping mission. Sacrifices must be made.