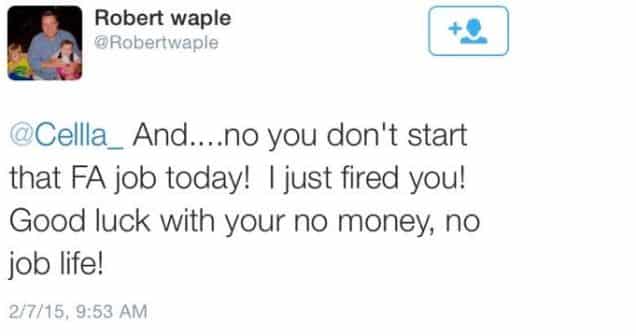 One Texas teen is learning the scope of social media the hard way. The teenager, known as Cella, was set to start a new job on Saturday at Jets Pizza in Mansfield, Texas, that is until she was fired. You see, Cella wasn’t too happy about the new job and made it known on Twitter. The tweet, which has since been deleted, said, “Ew, I start this f*** a** job tomorrow,” followed by a line of thumbs down emojis.

The tweet was screenshot by a future fellow co-worker and sent to Jets manager, Robert Waple. Of course, he wasn’t pleased with his future employee’s disdain for the job. The next day, he replied to the tweet by writing, “No you don’t start that FA job today! I just fired you! Good luck with your no money, no job life!”

The situation quickly went viral. Comments on her Twitter page are coming in from around the world, as far as Saudi Arabia and Australia.

Some questioned whether the tweet really came Jets Pizza manager, Robert Waple. He took to Twitter to defend his identity and decision to fire Cella.

“Working register (the till), taking phone orders, making subs/salads. Eating free pizza. How hard would that have been?” he asked.

“I would’ve just called her and fired her, but I wasn’t at work and didn’t have her number… probably one of the dumbest things to say about a job you haven’t started yet.”

Former Jets employees have also joined the conversation to tell Mr. Waples about their negative job experiences and Robert is not shy to respond.

“Just thought you should know I was stoned out of my mind every time I went into work, and your pizza sucks,” one wrote.

“Being high would only partly explain how you could deliver a pizza to the wrong house…multiple times,” his former manager replied.

It seems Cella did not take the news of losing her job too hard. She later tweeted out a photo to her former manager of a cartoon playing with stacks of cash.

The US arms sale industry is large and successful. More than 30% of exported weapons in the world come from the United States. They supply to no less than 90 nations making it one of the largest suppliers of weapons in the world. The US makes an estimate of almost 200 Billion dollars in annual… END_OF_DOCUMENT_TOKEN_TO_BE_REPLACED

Now that the election results are almost final, we all want to ask what’s going to happen to Donald Trump after leaving the office? All US Presidents inevitably reach the point where they leave the White House.  Besides, the constitution states that all US Presidents are subject to a two-term limit. What do former presidents… END_OF_DOCUMENT_TOKEN_TO_BE_REPLACED

This is the first time in modern history that the US held presidential elections in the middle of a pandemic. In truth, the US elections may have overshadowed COVID-19 and the side effects are limitless. America is facing a tough crisis of discontentment with the current administration. An understandable case but a situation that may… END_OF_DOCUMENT_TOKEN_TO_BE_REPLACED