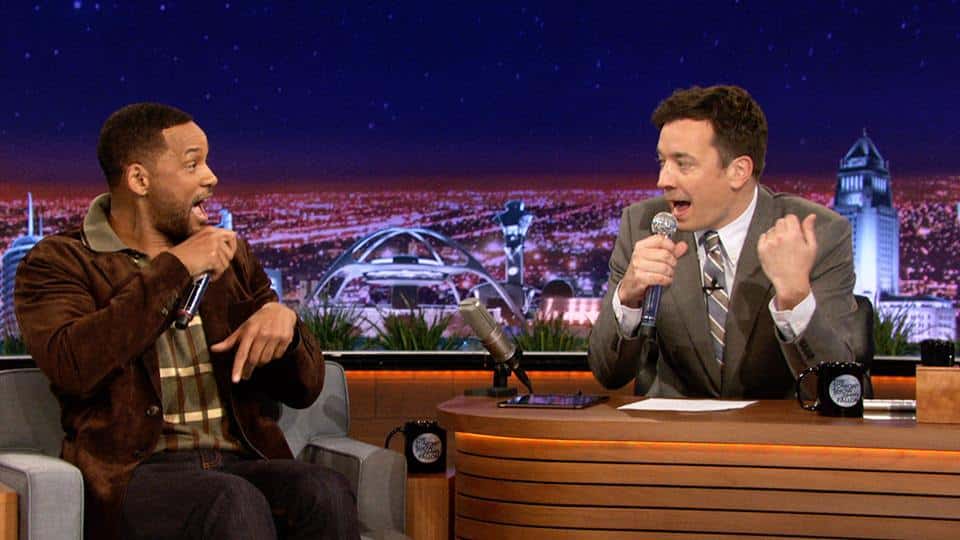 Will Smith and Jimmy Fallon have been all over social media this week, in large part to Jimmy Fallon recreating The Fresh Prince of Bel-Air opening intro to the show. Fallon and The Tonight Show are back in Los Angeles this week and to mark this special occasion, Fallon seems to be out doing himself has 2014’s Entertainer of the Year.

Watch Fallon change the lyrics, yet keep most of the video the same in this cold open.

Audiences were not surprised when the original Fresh Prince found his way to The Tonight Show for an interview and did another number with Fallon. Will Smith, current Hollywood superstar, has been so busy acting and shelling out movie after movie, that it was nice to see the rapper get back to his roots. Will Smith hasn’t released new music since 2005, so it was overdue.

It wasn’t an original song, but a serious 1988 throwback with Rob Base and DJ E-Z Rock’s “It Takes Two.” Smith and Fallon used a beatbox iPad app that loops and layers vocal tracks with a little help from the Roots

Jimmy Fallon and Will Smith should hit the studio ASAP.

The world is devastated by the news that Britain’s Prince Philip, the Duke of Edinburgh, has died at the age of 99. Palace media confirms that the Duke has expired mid-day today, April 9th. The announcement did not contain any specifics on the cause of death. The United Kingdom will enter a state of national… END_OF_DOCUMENT_TOKEN_TO_BE_REPLACED

Who would have known that religious prophets would be among the most loyal supporters of former President Trump? In fact, it has been observed that the most conservative Christians may have been the right amount of push for Trump’s presidential win back in 2016. Since Trump’s election back in 2016, numerous self-proclaimed “prophets” have been… END_OF_DOCUMENT_TOKEN_TO_BE_REPLACED

President Biden falls and slips multiple times on the Airforce One Steps and PEOPLE ARE GOING CRAZY! What’s the big deal? Some people are hating, while others are making memes just for the fun of it. We are all human, aren’t we? Everyone’s expected to stumble some time in their lives. However, with the internet… END_OF_DOCUMENT_TOKEN_TO_BE_REPLACED