by SocialNewsDaily 8 years ago6 months ago

Social media is at the top of the list of what people spend time on online. The Pew Research Center states that 74 percent of online adults use social networking sites.

That’s one reason celebrities and businesses have to make sure they have a solid presence on social media. They can offer customer service, provide information, and simply engage with their customers – showing a personal touch somehow. This activity can result in customer retention and acquisition (a larger fan base for celebrities), but making mistakes on social media can be deadly.

With social media, everyone has his own megaphone, and news – good or bad – can travel faster than the speed of light. There have been many social media fails in the past year, but here are some ridiculous ones that make you shake your head.

The popular actor/director has a lot of talents, but having sound judgement when it comes to finding a date doesn’t seem to be one of them. His big mistake last year was the talk of the town: private Instagram messages and texts between him and 18-year-old Scottish tourist Lucy Clode were posted by the latter.

The actor apologized later on, but the next day, he tweeted:

I’M NOT! I HOPE PARENTS KEEP THEIR TEENS AWAY FROM ME. Thank you https://t.co/I1d4n3yVe0

The guy doesn’t seem to learn, does he? Then again, we haven’t heard anything similar from him lately.

Everyone knows of Volvo’s reputation when it comes to car safety, but it’s tasteless reaction to the Malaysia Airlines Flight MH370 tragedy was a total social media fail. It posted a message on China’s popular social media site, Weibo (English translation):

“The rescue operation for the missing Malaysia Airlines MH370 plane is in full swing. Passenger safety is also a top priority at Volvo Cars, let’s pray together for the 239 lives that were on board of the plane. Bless them, and may a miracle occur.”

The intentions may have been good, but that second line demolishes anything positive the message may have brought. This is an excellent example of why companies need social media management and monitor their accounts closely.

Every social media professional knows just how important hashtags are. One excellent hashtag can make an account a household name overnight. Bandwagoning and jumping on an existing hashtag without looking into its original context, however, can have devastating effects.

This is what happened to @DiGiornoPizza late last year when it adopted the hashtag #WhyIStayed. Soon after, they realized that the hashtag was originally created to encourage battered women to share their experiences, in the light of the Ray Rice (Baltimore Ravens) issue of being fired from the team after assaulting his fiancee.

The pizza company was quick to apologize, however, and its social media presence is back on track. 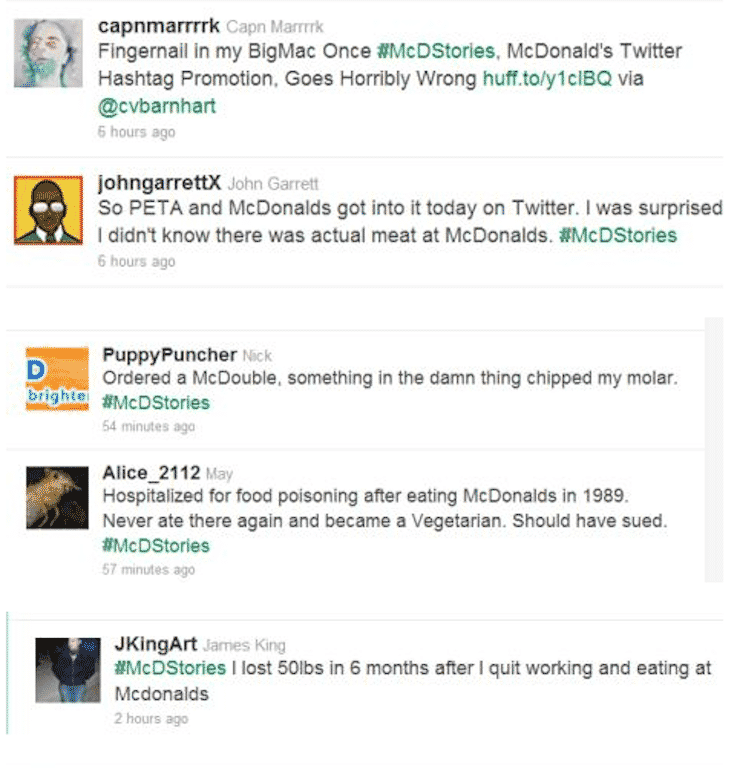 Sometimes, even when you don’t join the bandwagon and create your own hashtag campaign, things can still go wrong. That’s what McDonald’s learned when they started the #McDStories campaign. The idea was to encourage people to share positive stories about the fast food chain.

The result was quite the opposite. The Internet did its thing, and people shared awful experiences instead.