by Melissa Stusinski 10 years ago11 months ago

Hello There, Racists!, considered the “Best New Tumblr,” focuses on shaming racists. It was originally started on November 11, but since then it has taken off, much like other digital vigilantism that has happened since President Obama was re-elected.

The Tumblr didn’t gain much popularity until Jeremy Botter (the editor of the Houston Chronicle’s Brawl sports blog) tweeted about it, and K. Thor Jensen (an award-winning writer, illustrator, and influential Twitter user) began following it.

The Tumblr was taken down (likely due to complaints from the people it shamed), but it was started up again by another user, who stated:

“Some people are angry that this may cost these fools, that they won’t be able to get a job, or get into college. This makes no sense. Here you have fools who are judging others on the basis of the color of their skin, and I am supposed to feel sorry for them if their foolishness causes them problems?”

The user goes on to explain that he will continue to post the tweets and Facebook photos of people who make racist comments. Those who are written about will have the chance to respond to the post and will have their comments posted in full if they do so. They also can contact and ask to have their entry deleted if they “have a compelling explanation for why you posted this.”

The new Tumblr “Hello There, Racists!” will likely help continue the debate of whether internet shaming of online jerks is okay or not. 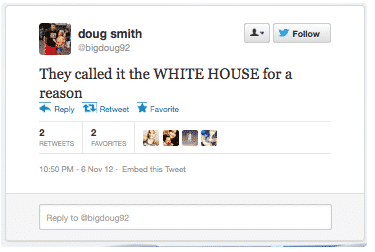