Chelsea Handler Is Topless Again And You’ll Never Guess Where

Chelsea Handler is at it again. The female comedian has taken a trip to Jerusalem and as usual she is sharing all of her crazy antics with us via her various social media outlets. Of course, that means a topless selfie… 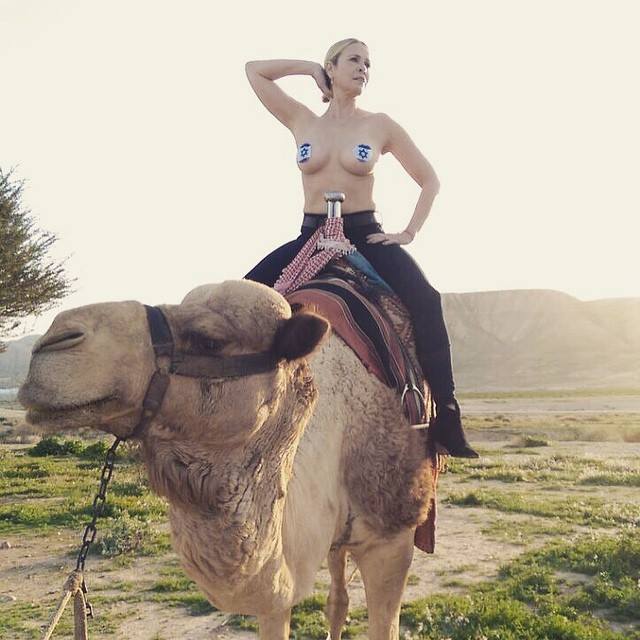 Yes, that is Chelsea posing on a camel with Israeli flag pasties. The comedian immediately uploaded the photo to her Facebook, Instagram and Twitter with the caption, “A Muslim allowed a topless Jew to ride his camel. And people say we can’t live side by side. I say we try and we can and we will. And, you don’t even have to be topless. L’chaim.”

A Muslim allowed a topless Jew to ride his camel. And people say we can't live side by side. I say we… https://t.co/qJ3OB6T2ts

The image has gone viral, but it isn’t the first time Chelsea Handler’s breasts have made it to social media fame. She is known for showing off her assets.

According to The Jerusalem Post, Handler is in Israel for a fundraiser supporting Sheba Medical Cener’s Tal Center for Integrative Oncology. Despite her charitable schedule, she has taken plenty of time for some shenanigans. Immediately after landing in the Holy City, Handler posted a photo of her visiting the Western Wall, complete with a Lil’ Jon lyric caption.

From the window…to the wall. Jerusalem is for lovers. Are you there Oprah? It's me, chesty. pic.twitter.com/Rpk2vBY7us

Handler is a follower of Judaism, but that hasn’t made her immune her from controversy. Last summer, she came under scrutiny after her talk show sidekick, Chuy, dressed up as Hitler to celebrate Germany’s victory at the World Cup. The show was ended with a disclaimer about the skit.

“I am dressed as Hitler as a joke, but I want everyone to know that he was a terrible man. I love Jews. Good night.”

Despite the disclaimer, the Anti-Defamation League still took offense and released a statement.

“While we try to give comedians leeway and do not believe that Nazi jokes should be completely off limits, this was an instance of taking a Hitler parody to the extreme. It was tasteless, offensive and hurtful, both to Holocaust survivors and their families and to members of the German team and all Germans.”

It is unclear how long Handler will stay in her ‘homeland.’