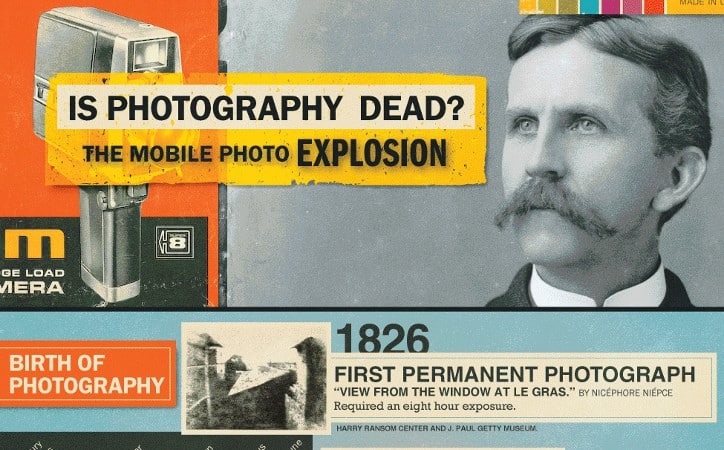 Social media has allowed for mobile photos to take off like wildfire, and according to a new infographic put together by Overgram, Instagram has 26 photos uploaded every second. The infographic takes a look at photography through the ages up until today.

Facebook is the king of online photos with 300 million uploaded daily. In fact, it has 10,000 times more photos than the Library of Congress. 70% of all activity is due to photos and helps tremendously to increase engagement.

Users who share a photo album see an average increase in engagement of 180 percent, those who upload a picture 120 percent, and a video 100 percent.

Instagram has really taken off and had 27 million users as of March 2012. While people make fun of using filters for images, the number one filter actually is normal. On the daily active users front, Twitter is lagging just barely behind at 6.9 million users compared to Instagram’s 7.3 million.

Twitter wins though with the average amount of time spent using its mobile app with 257 minutes compared to 170 minutes. Photos on Tumblr make up 42 percent of all posts.

There are 741 million phones worldwide that have some sort of photo capability and the most common activity is taking photos or texting, clocking in at 73 percent. Another interesting stat is that 91 percent of smartphone owners take at least one photo per month compared to 73 percent of digital camera owners.

Mobile photography is on the rise and this infographic shows just how far things have come, starting with the first permanent photograph in 1826. For even more insight, give it a look below.