OK, are you ready for your daily nightmare? A rare 300-toothed frilled shark was recently caught off the coast of Victoria, Australia.

According to AZ Central, the rare frilled shark (Chlamydoselachus anguineus) was caught last month in AUstralia. It’s about 6 feet long, has the body of an eel, a tail like a shark, and hundreds of teeth. 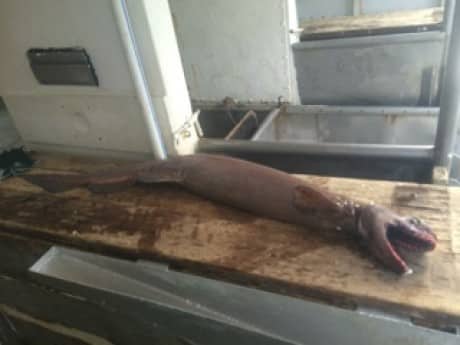 SETFIA writes: “Seldom observed, the frilled shark may capture prey by bending its body and lunging forward like a snake. The long, extremely flexible jaws enable it to swallow prey whole, while its 300 needle-shaped teeth aligned in 25 rows make it difficult for the prey to escape. Some literature suggests its body shape allows it to feed along crevices on cephalopods, bony fishes and other sharks. A large liver packed with low-density oils and hydrocarbons allows it to maintain neutral buoyancy at depth.”

The rare frilled shark was caught by David Guillot last month when he was trawling for sea perch.

Guillot said: “The head on it was like something out of a horror movie. It was quite horrific looking. … It was quite scary actually. I’ve been at sea for 30 years and I’ve never seen a shark that looks like that.”