Have you seen the latest cover of In Touch Magazine? The tabloid published an image of Bruce Jenner dressed up like a woman on its cover this month along with a story called “My Life As A Woman.”

The magazine claims that Bruce Jenner is undergoing a sex change operation but the proof is pretty thin. For one, the now infamous cover photo is clearly photoshopped. In Touch basically took Jenner’s face and put it on Dynasty actress Stephanie Beacham’s shoulders. 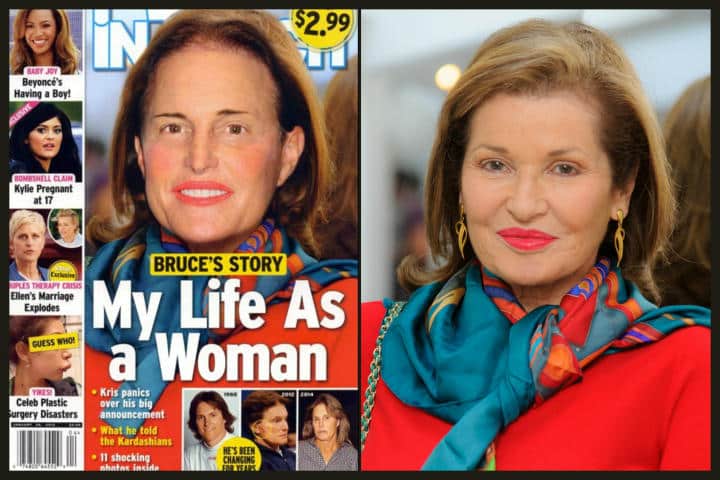 According to writer Joshua Espinoza at Complex, who apparently had the privilege of reading In Touch’s controversial article, the cover photo was not supposed to show what Bruce Jenner looks like now. Instead, it shows what he supposedly plans to look like after he gets a sex change operation.

The magazine writes: “(The image shows) what Bruce wants to look like when his transformation is complete, and their inside knowledge was used for our photo recreation.”

The magazine cover stirred up outrage in the LGBT community.

Kate Bornstein, the author of Gender Outlaw, told The Advocate: “Bruce Jenner is being bullied, and publicly shamed for no other reason than being trans. I’m so sorry for B.J.”

YouTube star Gigi Gorgeous added: “It’s always sad to see the media alter images of someone in the public eye. Until Bruce chooses to share his story — whatever it is — it’s no one’s business. Being transgender is not a joke or something to poke fun at.”

As for the Jenner family… Kris Jenner is the only one who has responded to Bruce Jenner’s cover so far. She told TMZ that “it’s just mean to do whether or not it’s true.”