Ellen DeGeneres Responds To Anti-Gay Pastor In The Most Brilliant...

On Ellen DeGeneres’ most recent show, she addressed an article posted that week which accuses Hollywood of having a “gay-agenda” and calls out DeGeneres specifically. This article, posted to TheChristianPost.com, was written by pastor Larry Tomczak titled “Are You Aware of the Avalanche of Gay Programming Assaulting Your Home?”

Ellen commented on the accusation in the best, and most “Ellen” way possible. 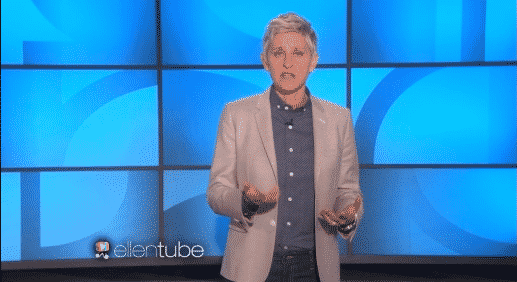 “I don’t usually read anything about myself, unless it’s about me being pregnant and then how else would I know? Got to find out. But I heard there was an article written about me and I would like to address it right now.”

Tomzcak wrote, “Ellen DeGeneres celebrates her lesbianism and “marriage” in between appearances of guests like Taylor Swift to attract young girls.” 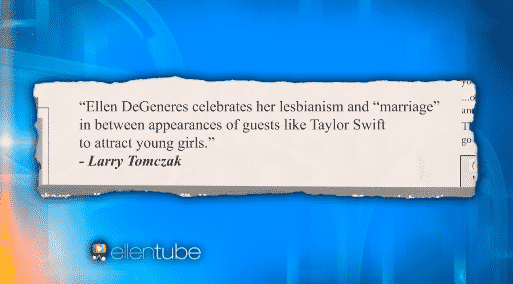 Ellen commented on his accusation saying, “OK, let’s just break this down. First of all, I’m not ‘married,’ using air quotes, I’m married. That’s all. And, Larry, I don’t even know what it means to celebrate my lesbianism. I mean… Well, I guess I do, where Ellen sets off a popper to celebrate “Like that! Yay! I’m gay!”

Ellen mentioned how this anti-gay pastor critizced shows like Modern Family and Glee for “promoting gay agendas, “If you ask me, Larry is watching a lot of gay TV.”

Of course, after she gets out some harmless jokes, she brings down the laughter to convey why she is such a caring individual, saying, “The only way I’m trying to influence people is to be more kind and compassionate with one another. That is the message I’m sending out. I don’t have an agenda.” 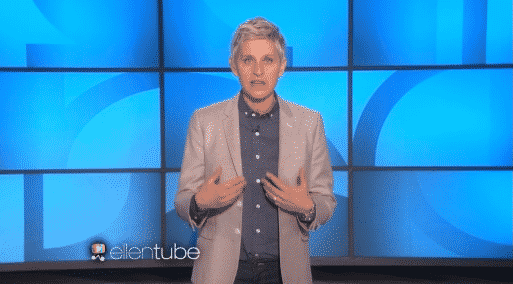 But wants to end on a loving, yet humorous note.

Having a spinning vortex, spinning it to the camera, she exclaims, “I’m not here to brainwash anyone. Attention, youth of the world, I want you to live your lives being exactly who you are. Be true to yourself — the most important thing is to be true to yourself.”

You can watch the full video on EllenTube.com.