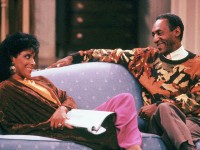 Bill Cosby’s longtime onscreen wife, Phylicia Rashad, came to his defense today saying that we should just “forget” the women who have accused the comedian of sexual assault.

Rashad told Showbiz 411: “Forget these women … What you’re seeing is the destruction of a legacy. And I think it’s orchestrated. I don’t know why or who’s doing it, but it’s the legacy. And it’s a legacy that is so important to the culture.”

The actress said that she doesn’t believe the women, namely Beverly Johnson and Janice Dickinson, who have accused Cosby of sexual assault. As proof, Rashad claimed that Camille Cosby would never sit idly by as her husband assaulted women.

Rashad said: “his is a tough woman, a smart woman. She’s no pushover.”

So where did these allegations come from? According to Rashad, someone is trying to keep Cosby off TV .

Rashad said: “Someone is determined to keep Bill Cosby off TV … And it’s worked. All his contracts have been cancelled.”

Phylicia Rashad’s comments created quite a stir online. Many people came to Twitter to express their bewilderment about the actress’ comments.

Claire Huxtable was a feminist hero. No, Phylicia Rashad is not Claire. Just like Bill is not Cliff.

There has to have been a better way for us to find out that Phylicia Rashad & Debbie Allen were both replaced by aliens.

I understand Keshia Knight Pulliam saying “I can’t speak to that.” I can’t understand Phylicia Rashad dismissing/attacking the women

Phylicia Rashad’s comments disappoint me so much, man.

I finally know why phylicia rashad always looks coyly devious. It’s because she might actually be a demon.

So what I am not seeing from Phylicia Rashad’s statement is “He Didn’t Do It.” Just “His legacy is too important, so forget those women.”