Twitter Saves Teen Left Without Toilet Paper After Doing A...

You know the feeling.

A 16-year-old from Lancaster, Adam Greenwood, felt this feeling about a month ago while on a train. After taking a “reasonably large poo” on his way to Glasgow, Adam noticed he did not have any toilet paper near him. Desperate and probably bored, Adam tweeted the company who’s train he was on.

Adam tweeted saying he was on J and a hero came to his rescue:

@AdamPlaysYT We'll send someone down to you ^MW

Buzzfeed News spoke with Adam about the incident and his thought process. Adam said, “As soon as I saw the was no paper I instantly thought, let’s tweet about it and make people laugh. There were a few small laughs on Twitter but nothing more. Then I sort of realised – oh no – there actually is no paper. After realising this I got a tweet from Virgin Trains asking which carriage I was on, so I responded quickly by peering out the toilet room door and checking the carriage letter – this wasn’t awkward at all I swear. I tweeted back with the carriage number and I shortly after I saw a guy looking quite worried in a full black suit carrying toilet roll, after the awkward exchange and smiles I grabbed it off him and finished what I started!”

Adam was travelling again on Virgin Trains the next day and decided to continue the fun. Virgin Trains has a humorous yet effective social media presence. Talk about customer service! 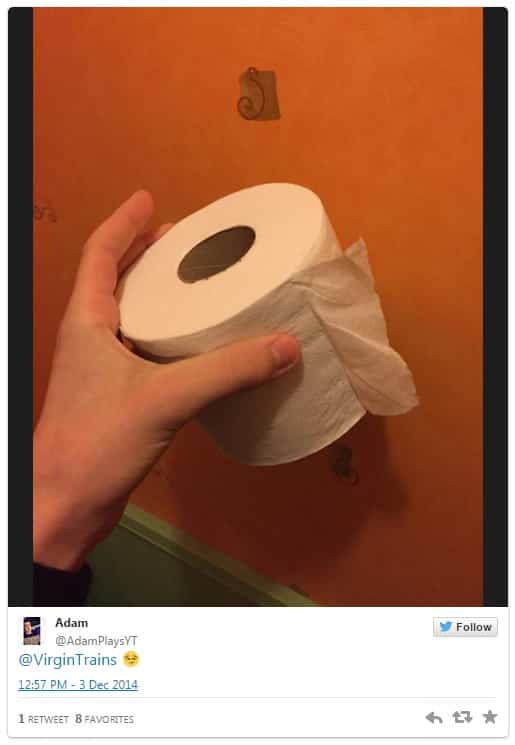