As the Fanpage.it YouTube description reads, “What happens when you put a boy in front of a girl and ask him to slap her? Here is how children react to the subject of violence against women.”

The YouTube video titled “”Slap her”: children’s reactions” has gone viral getting 2 million views in less than 2 days. It is eye-opening. The PSA was created by Ciaopeople Media Group and has been viewd over 34 million times on their Facebook page.

Boys ranging in ages from 7-11 were asked a series of questions, then were introduced to a girl named Martina. They were asked to make funny faces at her, caress her face, and asked what they like about her. The adorable boys were very genuine in calling her pretty and saying she has nice but their non-verbal body language changed drastically when they were told to slap her.

Luckily, most of the reactions can be summed up in this boy’s face.

Watch the video and be amazed at how even the youngest of children know domestic violence isn’t right and have your faith restored in humanity, or the future of it at least. In a 2012 United Nations report, domestic violence in Italy was called “the most pervasive form of violence” in the country. Italy’s Former Prime Minister Enrico Letta called it femicide – the killing of women at the hands of current or former lovers. 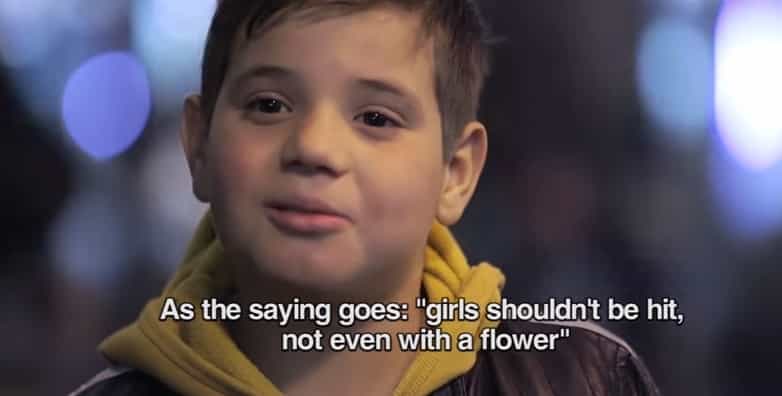