by Meagan Freeman 8 years ago7 years ago

AirAsia Flight QZ8501 has gone missing. CNN is reporting the plane lost contact with Jakarta air traffic control. The plane was bound from Indonesia to Singapore. AirAsia officials say air traffic contact with the flight was lost at 7:24 a.m. Sunday (7:24 p.m. Saturday ET). The plane left Juanda International Airport at 5:27 a.m. Sunday (5:27 p.m. Saturday ET) and was scheduled to arrive in Singapore at 8:37 a.m. Sunday (7:37 p.m. ET). Search and rescue operations are currently underway, but there is no sign of the aircraft.

AirAsia immediately released a statement regarding the incident and ongoing investigation. 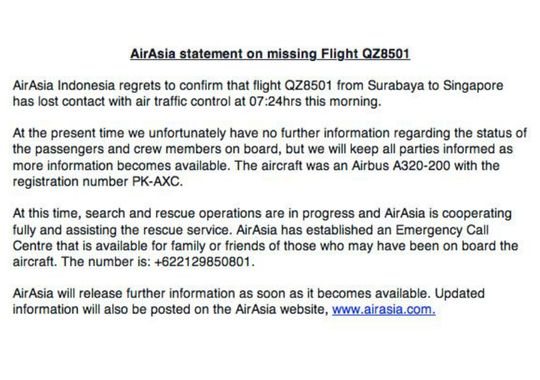 “At the present time we unfortunately have no further information regarding the status of the passengers and crew members on board, but we will keep all parties informed as more information becomes available.”

The plane is reported to have 155 passengers and six crew members on board. Out of the 155 passengers, 16 of them are children and 1 is an infant. There are six foreigners on board — three South Koreans including an infant and one each from Singapore, British and Malaysia, said Raharjo. The rest of the passengers are Indonesians.

Officials say the weather conditions were cloudy. CNN’s meteorologist, Derek Van Dam, is speculating that it is probable the weather played a role in the plane’s disappearance.

“We still had lines of very heavy thunderstorms, but keep in mind, turbulence doesn’t necessarily bring down airplanes.”

AirAsia is a popular airliner in Indonesia and is known as the leading budget airlines with more than 100 destinations and subsidiaries around the country.

This comes just 10 months after the disappearance of Malaysia Airlines Flight 370, which dropped off the radar over Southeast Asia on March 8.

This story is developing and search and rescue operations will continue.