Shock And Awe: Social Media Reactions To Slaying Of NY...

The New York Daily News reports, the officers — Rafael Ramos, 40, and Wenjian Liu, 32 — were in the area as part of a push to beef up cops’ presence near violence-plagued housing projects.

Before the attacks Brinsley took to social media to announce he was going to kill the officers as an act of protest of the killings of Micheal Brown and Eric Garner.

“I’m putting wings on pigs today. They take 1 of ours … let’s take 2 of theirs,” Brinsley, 28, wrote on Instagram, alongside a photo of a silver handgun.

“This may be my final post … I’m putting pigs in a blanket.”

After killing the officers, Brinsley escaped to a subway station, where he shot himself. He later died of the self-inflicted gun wound.

Social media has been ablaze with posts of support and protest. Perhaps the most profound, and most heartbreaking, was a Facebook post from one of the slain officer’s son, Jaden Ramos. 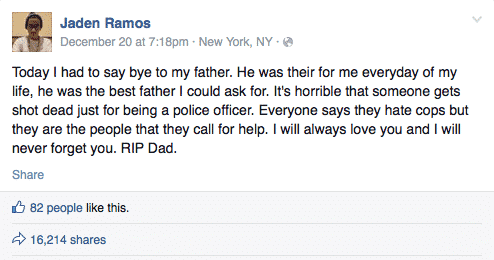 Fortunately, the majority has been in support of the men and women who put their lives on the line everyday. Normal people and celebrities alike posted their thoughts.

Prayers to the families of the NYPD officers who were killed today in Brooklyn.

Sick to my stomach about the killing of these NYPD officers. More people dead, more families hurting, more division. God help us.

I am outraged at the killing of 2 police officers in Brooklyn. That is why we stress non violence as the only way to fight for justice.

But, there was a small minority of people that praised the killer. The Daily Caller compiled a collection of tweets from the monsters who support the killing of innocent police officers as a way to appease the racial tension.

Rapper, The Game, responded with an insensitive tweet about the slayers. The tweet was immediately attacked by disgusted fans.