Mega-retailer Macy’s is probably busy prepping for the holiday season so much that they can’t be bothered to get to anything else, but that hasn’t stopped customers from inundating their social network profiles with messages to “Dump Trump.”

Some background: Donald Trump is (and has long been) a spokesman for the retailer, but his insistence upon wild and unfounded conspiracy theories targeting President Obama, in addition to his unambiguous calls for “revolution,” have caused many Americans to turn on the business mogul. A petition from MoveOn to “Dump Trump” from Macy’s advertising is currently sitting at over 560,000 signatures.

@macys Donald Trump is disgusting. I won’t shop w/you guys again if you don’t drop him I’ll tell all of my friends not to shop w/you too.

@macys <– Donald Trumph ?? you cant be serious, switching to —> #DILLARDS for xmas #shopping!! hes a #rasicst, or you blocked that out?

Posts on Macy’s Facebook are similar in tone. When Macy’s posts some kind of shopping deal or announcement, every couple of replies include some kind of message about Donald Trump. 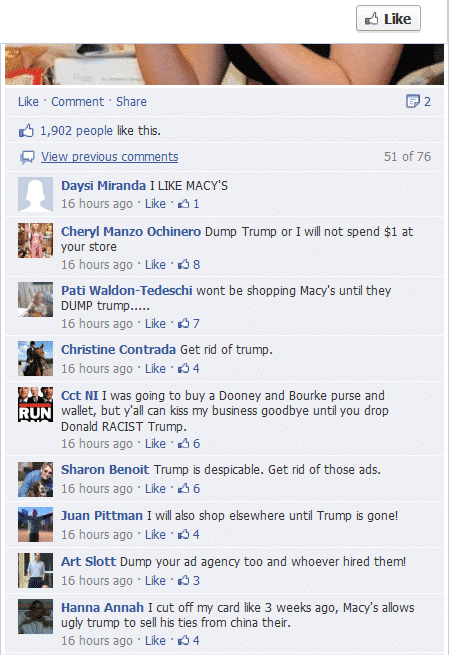 Macy’s actually has responded to the various calls to “Dump Trump,” and from what they’re saying, it doesn’t look like The Donald is going anywhere.

[quote type=”large” align=”left”] “Macy’s marketing and merchandise offerings are not representative of any political position. Many of the individuals associated with products sold at Macy’s – or at any retailer, for that matter – express personal opinions that are not related to the merchandise we sell or to the philosophies of our company. In our merchandise assortment, we strive to meet our customers’ expectations for unique and interesting products across a broad array of styles, categories and brands. This allows our customers to choose what they prefer. A longtime focus of Macy’s holiday advertising has been to celebrate the season’s spirit of generosity and goodwill through our ongoing ‘Believe’ campaign, and that is the sole message of our holiday television commercials.” [/quote]

What do you think? Should Macy’s “Dump Trump?”