Cards Against Humanity Bullsh*t Edition Is Really Full Of Crap...

The game makers held a special holiday promotion this season for a special “bullsh*t” edition of Cards Against Humanity. The company cleared stated that this special edition was just a chunk of poop wrapped in a box but many people bought it anyway. Of course, most people didn’t actually believe that the Bullsh*t edition of Cards Against Humanity would actually contain poop.

Well, they were wrong.

Check out these Cards Against Humanity “Bullsh*t” edition unboxing photos.

What did you expect? CAH has been telling customers for weeks now that the bullsh*t edition actually contained bullsh*t. They even documented some customer regret on their webpage.

Here is the FAQ section from the promotion. 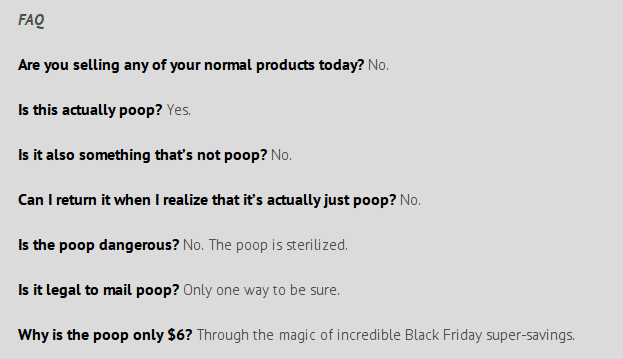 The Cards Against Humanity bullsh*t special was only available for one day. The company is now running the he “Ten Days or Whatever of Kwanzaa” promotion. For just $15, CAH will send you ten random presents over the holiday season.

CAH writes: “Cards Against Humanity’s Ten Days or Whatever of Kwanzaa is a Seasonal Promotion that we’ve created to capture your attention and money. We’re sending ten mystery gifts throughout the month of December.”

The company didn’t say if feces would be available for this promotion. All they’ve said is that the gifts “aren’t offensive. They’re just weird.”