It seems that it’s all too easy to get caught up in a Facebook hoax — at least, if you don’t know what you’re looking for. Anyone can post anything to the social media service, and once it’s on there it’s liable to be shared around again and again.

Here are a few Facebook hoaxes it’s worth being aware of so you don’t get caught out — and perhaps to warn your friends about. 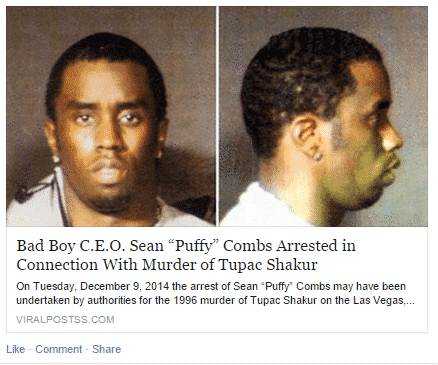 This is a hoax that has been going around for years, but it’s seen a swell of popularity thanks to new article reporting it being published online over the last couple of months.

While the exact events that led to Shakur’s death in 1996 remain unclear, the widely reported ‘news’ that authorities announced the arrest of Combs in 2014 has no basis in truth.

2. Instructions on How to Charge Your iPhone in the Microwave 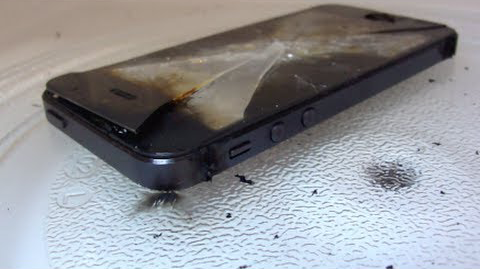 It might seem like common sense, but there’s no way that placing your iPhone inside a microwave is going to recharge the battery — instead, you’re likely going to end up destroying the phone.

However, it’s difficult to blame those fooled by this, one of the more ill-intentioned Facebook hoaxes currently circulating. Other kitchen appliances it’s best to avoid your smartphone in include toasters, ovens and the kettle.

3. Anything Posted by The Onion or Clickhole

There’s nothing malicious about these hoaxes, but that doesn’t mean that thousands of Facebook users have been tricked by the satire of sites like The Onion.

Everything from Michelle Obama being reassigned to the Department of Agriculture to reports of a Stretch Armstrong re-release bearing nipples have graced these sites — and, while these examples are very silly, some articles can easily be mistaken for the real thing if you’re skimming through your news feed.

Last month, many site — including this one — posted a seemingly legitimate video of something that didn’t seem possible; pro skater Tony Hawk testing out a hoverboard.

Then, a few weeks later the dreams of any Back to the Future Part II fan were crushed, when comedy site Funny or Die took the credit for producing the hoax. It seems we’ll have to wait a little longer for hoverboards to become a reality. 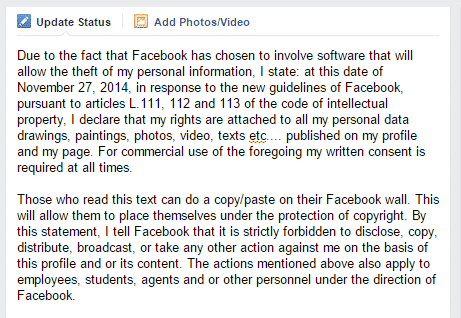 Here’s one that seems to make a resurgence every time it looks like it’s gone for good; a paragraph of text that is alleged to give users copyright protection on their personal information if they post it as their status.

If you use Facebook, you’ve already given them the right to share your content — and there’s nothing that a chain-letter status can do to stop that. It’s certainly worth thinking about just what you share on social media, but a cure-all status like this won’t do much for you.