‘Young and the Restless’ Actor Assaulted On Thanksgiving

On Thursday evening, Corey Sligh was heading to bring his friend Thanksgiving dinner when an altercation outside of a Los Angeles Rite-Aid left the actor badly injured. Sligh,  known for his work as a waiter and bartender on The Young and the Restless, was leaving the drug store with his girlfriend Alisa Berhorst when they encountered two men doing donuts, almost running people over and hitting curbs right outside.

After Sligh told the men to slow down, a confrontation ensued causing the men to hit the actor with their car and then physically assault him while he was down. The 27-year-old suffered a broken arm and was treated at Cedars-Sinai Medical Center. In the meantime, police have two suspects in custody. According to the officers, the suspects fled the scene but soon crashed their car and were tracked down by an eye witness.

Berhorst told KCAL 9, “The guy walked up on him like ‘I’m in the mood to kill somebody and this is who it’s going to be because he told me to be careful and slow down and go away.” 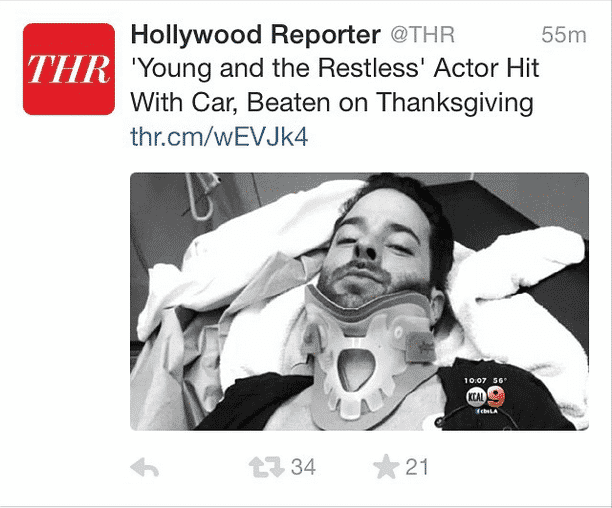 Sligh is in good spirits and updated his Instagram on Saturday with the above photo while adding:

Well, I guess I can finally say “I made the Hollywood Reporter!” lol. #thankful no matter what to be here! Hope to heal up in the next few weeks with Rehab and family! Thanks for all the love and I’ll keep y’all posted! #hollywoodreporter #hollywood #cali