The Sims Are Getting Social With New Facebook Game

by Dan Evon 11 years ago9 years ago

The Sims are coming to Facebook. EA announced today that a new version of the popular online game, called The Sims Social, will be hitting Facebook later this summer. 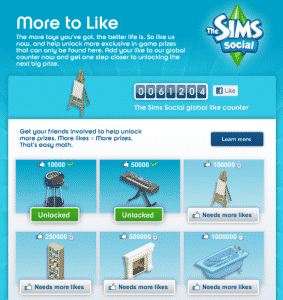 Here’s the description from the FB page:

“The Sims Social brings the fun and creativity of The Sims to Facebook! Create unique Sims and live out their dreams—or stir up trouble by pulling pranks. Develop deep relationships to unlock new features and advance: befriend and fight, date and cheat, love and betray. Play with life in a whole new way—with your real friends, for free!”

EA has already found success in the social gaming arena with products like Monopoly Millionaire, which set a Guinness World Record for simultaneous game play, and could take away a large chunk of Zynga’s 250 million strong user base with The Sims Social.