Nikolai Kryaglyachenko may look like an ordinary boy, and he is. Or at least he was — until one fateful accident changed his life and gave him an ability eerily reminiscent to that of a well-known comic book superhero/villain Magneto.

The twelve-year-old Russian was walking home from school one day when he stopped to lean on a lamp post. That’s when — by fate or accident — everything changed.

Unfortunately for Nikolai, the lamppost had a faulty wire and the schoolboy was blasted across the street by a jolt of electricity.

“When I came round, I felt groggy, but managed to get home and told my mum what had happened. When I woke up the next day and got out of bed, I found some coins that had been lying on the mattress had stuck to my body. Then when I was having breakfast and dropped my spoon, it stuck to my chest,” Nikolai revealed.

Now Nikolai can do this: 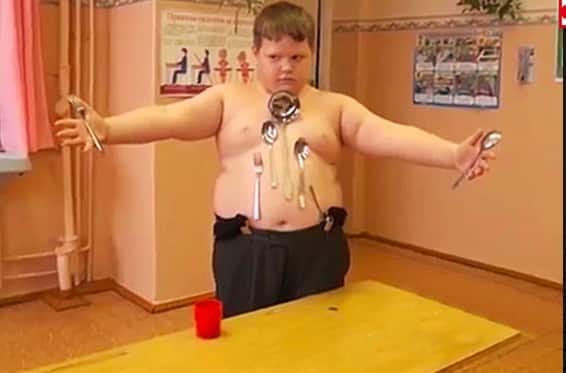 The Twitter world erupted. Many of the comments were skeptical or mocking in tone:

I think hess just got his own gravitational field https://t.co/9qe8g4EhTa

sorry that was cruel

Some questioned the reliability of the story:

Oh look, it's a bunch of supposed news websites reporting the claims of a real-life "Magneto Boy" as true: https://t.co/CMFimY08ZL

But the Post does cite this old Guardian story which reports on an instance similar to Nikolai’s in 1986 after the Chernobyl accident. Fact or fiction — it’s definitely crazy.