British Pop Stars Record Song to raise money for the...

Some of Britain’s largest pop stars are gathering together to re-record the Band Aid charity song, to help fight Ebola. One Direction, Rita Ora, Coldplay’s Chris Martin, Sam Smith, Ed Sheeren, U2, and a handful of other artists are re-recorded the “Do They Know It’s Christmas” song on Saturday in West London.

They updated some of the lyrics, to reflect the current crisis and go along with the general message of combating Ebola in West Africa.

The line, “Where the only water flowing is the bitter sting of tears” has been replaced by, “Where a kiss of love can kill you and there’s death in every tear” and Bono’s famous line, “Well tonight thank God it’s them instead of you” is now, “Well tonight we’re reaching out and touching you.” The second and third verse have also been changed to reflect the Ebola crisis.

The “Do They Know It’s Christmas” single was first recorded some 30 years ago to help those affected by famine in Ethiopia. It raised $11 million US and was deemed a phenomenal success. The song has also been re-recorded in 1989 and 2004, in times of crisis.

Musician and philanthropist Bob Geldof was the force behind the original recording of this song, and has been behind each subsequent recording. The United Nations contacted Mr. Geldof recently, requesting something be done to prevent Ebola from spreading further in West Africa. Mr. Geldof decided to re-release “Do They Know It’s Christmas” and began seeking out some of Britain’s brightest stars for the recording. 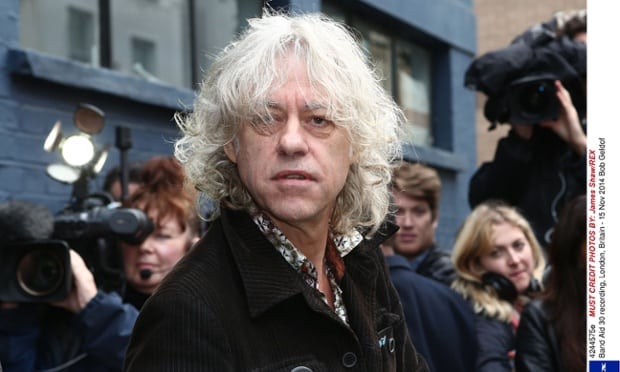 Mr. Geldof spoke to the artists before they recorded the chorus. Emeli Sandé  said “Bob gave a really touching speech before we started singing so I think that really got everybody in the mind-frame that we needed to be in to remind us it’s fun, but we’re here for a really serious reason.” She also added how impressed she was from Mr. Geldof’s speech and “how passionate he was about this cause and how it’s so unnecessary that so many people should be dying.”

According to the World Health Organization, Ebola has killed more than 5,000 people in West Africa, mostly in Sierra Leone, Liberia and Guinea. The British finance minister, George Osborne, has agreed to forgo the usual tax (VAT) owed to the government from sales of this song, so that every penny can go towards fighting the spread of Ebola in West Africa.

The song is expected to spend the Christmas season in the top charts and won’t be released on Spotify (and other streaming services) until January.