by David 8 years ago10 months ago

While Instagram is primarily an image sharing site, it hasn’t stopped brands from riding on the wave of its popularity. According to Universum Global, 67% of the world’s biggest brands are on Instagram. This visual social media platform has allowed businesses to increase their reach to their target audience and leave a more lasting online presence.

Acronym for Imagine Games Network, IGN is an entertainment website that talks about film and music, among others. However, their bread and butter is gaming – its reviews for different game consoles and free game app are one of the more sought-after features of its site. Also, the site delivers the latest news and updates in the gaming world to its readers.

On its Instagram account, IGN finds ingenious ways to interact with its followers. Aside from asking users thoughts about the latest news (“How can you make a better ending than Toy Story 3 though,” they asked when Toy Story 4 was announced), it takes a trip down memory lane by revisiting some of the milestones achieved in gaming history for #tbt.

Just like IGN, Gamespot caters to hardcore gamers looking for their fix of the latest in the world of gaming. It won the “Best Gaming Website” in 2004 by Spike TV’s Video Game Award Show.

Instead of expanding on its feature on gaming in its Instagram account, Gamespot gives a behind-the-scenes look at the gaming industry as well as exclusive access with its employees during the latest events. 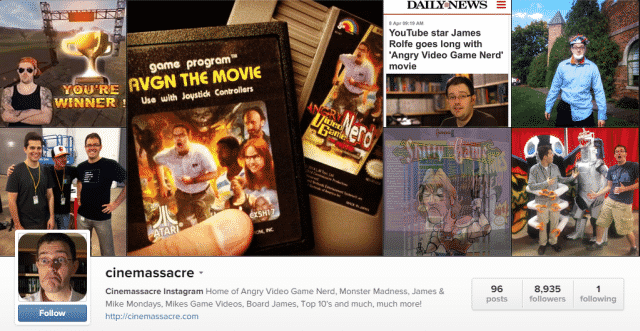 Cinemassacre made its name on Youtube with the help of The Angry Video Game Nerd, a video series hosted by James Rolfe, who plays the titular character, as he hilariously reviews the worst and most agonizing games in video game history.

Most of the updates on its Instagram accounts are from its vault of AVGN videos and fan art. Since it celebrates its tenth year in 2014, it would be wise of you to follow their account, watch some of their old videos, and see why AVGN was popular. 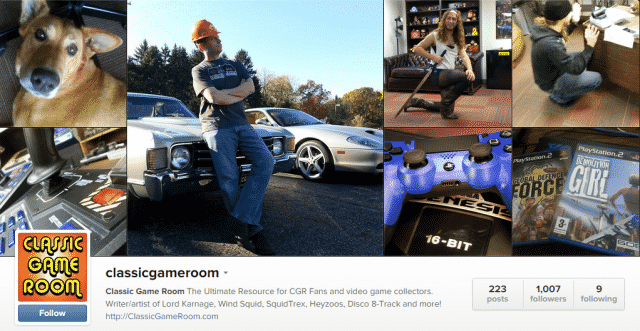 Classic Game Room also developed a follower through its Youtube where Mark L. Bussler, going by the name Lord Karnage in his videos, reviewed games new and old – as well as gaming peripherals such as gaming mousepads and pinball machines – in a very entertaining way.

Its Instagram account is less zany as the owner posts personal and non-gaming stuff once in a while. However, video game collectors will nonetheless enjoy its updates about his upcoming projects and videos.